Get embarrassed about bowel cancer and it could be too late

Don’t ignore the symptoms: some 1,000 people die from disease in Ireland every year 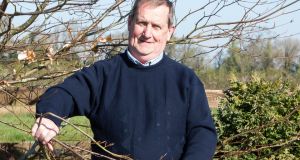 Retired postman Michael O’Donoghue from Pallasgreen, Co Limerick, who has recovered from bowel cancer after discovering he had the disease in 2010. Photograph: Liam Burke/Press 22

Michael O’Donoghue credits a sixth sense for the fact that he is alive today. The 66-year-old from Pallasgreen in Co Limerick, had a “strange intuition” in 2010 which compelled him to request a referral for a colonoscopy – and this action, he says, saved his life.

“In November 2010, I had a recurring chest infection and was off work with it for two weeks,” he recalls. “I was just about ready to go back to work but needed a cert from my doctor to give me the all clear so headed up to the surgery on a Friday evening, with the intention of beginning work again on Monday morning.

“On my way to the GP clinic, something told me that I should ask my doctor to put me forward for a colonoscopy. I don’t know what it was, just a strong feeling I had that I needed to be checked out.”

Luckily for O’Donoghue, who is a retired postman, his instinct proved invaluable as although he had no symptoms whatsoever, tests revealed a cancerous tumour on his bowel.

Over 2,500 people are diagnosed with bowel cancer every year in Ireland

“When I asked my GP for a referral, he said that I had no ‘red flag’ symptoms or signs of anything wrong, but if I really wanted to have the test, I could,” he says.

“I said I did and was referred for the colonoscopy which revealed that I had bowel cancer. Needless to say I was really shocked when I heard the news, but the doctor said that the fact that I had been diagnosed so early meant it was very treatable and straightforward – my intuition saved my life.”

April is Bowel Cancer Awareness Month and Joan Kelly, cancer support manager for the Irish Cancer Society, says being aware of the condition is vital to saving lives.

“Over 2,500 people are diagnosed with bowel cancer every year in Ireland and around 1,000 die from the disease annually, making it the second most common cancer in the country,” she says. “During the month of April the Irish Cancer Society will be campaigning to make people aware of the signs and symptoms of the disease.

“This year it has also developed an easy-to-use online Bowel Health Checker, which is a short quiz designed to inform people about staying healthy while checking their bowel health, as well as informing people about the sign and symptoms of bowel cancer. Once completed, there is a handy printout to take to the doctor should it be needed.

“But while the numbers of new cases per year continue to rise, survival rates have increased gradually with five in 10 surviving five years post-diagnosis in 1994 compared with six in 10 in 2012. So if bowel cancer is caught early, it is extremely treatable, which is why early detection and screening is so important.”

Because O’Donoghue was tested so early, his tumour was removed successfully and although it wasn’t entirely necessary, he also had a course of chemotherapy to ensure no cancerous cells remained in his body.

“A few weeks after my initial test, I was scheduled for surgery which removed the tumour,” he says. “The operation was a great success and I was back on my feet in a couple of days – in fact I was walking around the hospital the day after the operation.

“I then went to see an oncologist who said that I was an extremely lucky man and didn’t really need chemotherapy, but if I wanted to have it, I could. I asked him what he would do in my shoes and he said he would have chemo, so I said, “sign me up”.

“Everything went fine for me during the treatment, I felt no side effects and even went to Lourdes as a helper while I was in the middle of a cycle of chemo – I really had no problems at all and by the end of June 2011, the whole experience was over and I was as right as rain and have been ever since.”

O’Donoghue’s story is very positive and he would encourage anyone with symptoms to seek help as soon as possible.

“I know some people feel embarrassed about things like bowel cancer and don’t want to talk about it, but if they ignore signs and symptoms it could be too late to save them by the time they are diagnosed,” he warns. “It’s easier to be screened, diagnosed and tested than face the alternative.

“So I would say to everyone to stop worrying about taking the first step, screening is so easy that it can even be done at home and even if you have to pay for the tests yourself, it will be worth it in the end and may actually save your life.”

Kelly agrees and says there are screening services available but many people are not availing of the service.

“It is very important to talk about BowelScreen, the State screening service,” she says. “In its first screening round, from October 2012 to December 2015, BowelScreen had a screening uptake rate of just four in 10 people, meaning an average of six in 10 people were not taking up the offer of screening.

“Screening is vital in diagnosing cancers early and everyone needs to see it as a central part of a healthy lifestyle. If people are eligible and are being called for free screening, they really should take it up.”

About 1,000 people die from bowel cancer annually, making it the second most common cause of cancer death in Ireland but once diagnosed, treatment such as surgery, chemotherapy, biological therapy and radiotherapy can be effective.

The Irish Cancer Society says some people have a higher chance of getting bowel cancer and these risks may increase with any of the following:

1. You eat a diet high in fats and low in fruit, vegetables and fibre.

2. You are obese or overweight.

3. You have had a previous bowel cancer.

4. A member of your immediate family (mother, father, brother or sister) or relatives (aunt or uncle) has had bowel cancer.

5. You or someone in your family has or had polyps. A polyp is an abnormal growth of tissue in the lining of the bowel. Polyps are usually benign (not cancerous), but if left untreated, can sometimes lead to cancer.

6. You or someone in your family has a bowel condition called familial adenomatous polyposis or hereditary nonpolyposis colorectal cancer.

7. You have a history of bowel conditions like ulcerative colitis or Crohn’s disease.

– Blood in your bowel motion or bleeding from the back passage.

– A lasting change (more than a month) in your normal bowel motion, such as diarrhoea or constipation.

– Feeling that you have not emptied your bowel fully after a motion.

– Pain or discomfort in your abdomen (tummy) or back passage.

– Trapped wind or fullness in your tummy.

– Weight loss for no reason.

‘He was angry and punched it about nine times’: Should you recline your airplane seat?
4

What sold for €320k in Inchicore, Crumlin, Phibsborough and Terenure
9