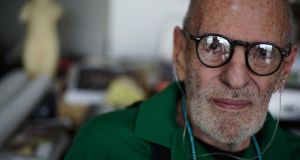 Larry Kramer in 2015: ‘It was an extraordinary 33-year relationship,’ Anthony Fauci says of their friendship. Photograph: Todd Heisler/New York Times

“How did I meet Larry? He called me a murderer and an incompetent idiot on the front page of the San Francisco Examiner magazine.” Speaking as he passes though a fever check on his way into the White House, Dr Anthony Fauci, the director of the United States’ National Institute of Allergy and Infectious Diseases, recalls some of his fondest memories of his friend Larry Kramer, who died early on Wednesday morning.

“It was an extraordinary 33-year relationship,” Fauci says. “We loved each other. We would have dinner. I would go see him in the West Village; he would come down to Washington. “But even recently, when he got pissed at me about something, he said to some paper, ‘Fauci’s gone over to the dark side again.’ I called him up and said, ‘Larry? What the..?’ And he’d say, ‘Oh, I didn’t really mean it. I just wanted to get some attention.’”

I was the face of the federal government. I was the one out there trying to warn the public, and he was, too. That was his way of saying, ‘Hello? Wake up!’ That was his style. He was iconoclastic, he was theatrical – he wanted to make his point

Nobody stirred up attention for a cause quite like Kramer did. An open letter to the San Francisco Examiner in 1988, Fauci says, was the first time he’d heard of Kramer, a playwright who had founded two activist groups: the Gay Men’s Health Crisis; and Act Up, the Aids Coalition to Unleash Power. Addressing Fauci in the letter, Kramer wrote: “Your refusal to hear the screams of Aids activists early in the crisis resulted in the deaths of thousands of Queers. Your present inaction is causing today’s increase in HIV infection outside of the Queer community.”

“I thought, This guy, I need to reach out to him,” Fauci recalls. “So I did, and we started talking. We realised we had things in common.” Kramer’s name-calling wasn’t personal, Fauci explains. “I was the face of the federal government. I was the one out there trying to warn the public, and he was, too. That was his way of saying, ‘Hello? Wake up!’ That was his style. He was iconoclastic, he was theatrical – he wanted to make his point.”

Over the years they were often asked to appear together, often on television news programmes. “We were on ABC’s Nightline, and Ted Koppel asked me about AZT,” Fauci says, referring to the first anti-HIV drug. “And Larry said, ‘You guys in the government don’t know anything. You’ve got it all wrong!’”

Fauci would get in a cab to go home, and later the phone would ring. “It would be Larry, saying, ‘How do you think we did?’ I’d say, ‘Larry, you just trashed me in front of 10 million people.’ “And he’d say, ‘Oh, I was just trying to get some attention.’”

As they became friends, Kramer tried to push Fauci into joining him in activism. “During the administration of George HW Bush, he told me, ‘Tony, you should chain yourself to the gates of the White House,’” Fauci says. “I said, ‘Larry, how would that help? I can go talk to President Bush any time. He’s a friend.’ He said, ‘You should still do it.’”

In 2001, with Kramer suffering from both hepatitis B and side effects of his HIV medication – he had the disease for at least six years before effective triple-drug cocktails became standard practice – Fauci became his doctor. Kramer had told him he was not doing well, and doctors were baffled. “I said, ‘Come to the NIH. We’ll work you up,’” Fauci recalls. “He was really at death’s door. We realised he needed a liver transplant.”

He made the character based on me a mix of goodness and rigidity. To him, that’s the federal government – rigid. On opening night, he comes up to me sheepishly and says, ‘Do you hate me?

Kramer went on a transplant list. But there was a public debate over whether he should get a scarce donor organ, because patients with HIV had long been considered less likely to survive, despite the introduction of effective medications. And, at 66, Kramer was older than a typical transplant candidate. Nonetheless, he got a new liver that December at the University of Pittsburgh Medical Center.

That not only set a precedent for HIV patients and older patients but also abruptly reversed the decline in Kramer’s health. “He really bounced back,” Fauci says. “It gave him multiple more years of life.” The relationship between the two men played out in Kramer’s literary works as well as in his political activism. Kramer’s autobiographical play in 1992, The Destiny of Me, includes a character based on Fauci. “He’s named Anthony Della Vida – Tony of Life,” Fauci says. “He told me he wanted the actor who was playing me to come down to Bethesda and go on hospital rounds with me and learn my mannerisms.

“He made the character a mix of goodness and rigidity. To him, that’s the federal government – rigid. On opening night, he invited my wife and me, and he’s so sensitive about our friendship,” Fauci adds. “I was standing around at the reception afterward with all these activists – Peter Staley, Gregg Gonsalves, Mark Harrington – and he comes up to me sheepishly and says, ‘Do you hate me?’

Monster or machine? Everything we know about coronavirus after six months
8