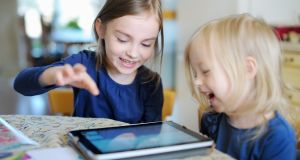 ‘The single, most reliable way to buy yourself half a day of almost-interruption-free work is the addictive 60-second video feed of TikTok’. Photograph: iStock

There are upsides to single parenting during a pandemic, chiefly the avoidance of another adult’s dark moods. Even at its craziest, since New York locked down in March - when my kids are still running around at 11pm, because I am too tired or up against it to put them down; when the dishwasher, never once, manages to unstack itself; or the arrival of mice in my apartment because apparently I can’t and won’t pick up crumbs - it has often struck me that short of illness, the only way this scenario could be worse was if I had to manage one more person’s needs. And then there is the downside: the effects of leaning on TikTok as a co-parent.

For the first two weeks of lockdown, we did what we were supposed to. I blew through a large deadline and engaged conscientiously with my kids’ remote schooling every morning. We did the worksheets. We made a word wall. I bought a whiteboard. In between learning activities, I scheduled “centre time”, which included building things, colouring and, yes, piano. It was fun, and novel, and everyone did what they were told.

The honeymoon didn’t last. I assume that, left to run its course, this timetable would have fallen apart, anyway. As it was, we never got to find out. After two weeks, I received a chasing email about the deadline, made the decision that it was the girls’ work or mine, and in the face of every parental instinct, absented them from school and broke out the iPads. On a shorter deadline, I could’ve slammed through on adrenalin and worked while the girls slept. But that model isn’t sustainable for long. And so, at 9am, I parked them on screens and hoped it would hold until lunchtime.

Obviously, now, I regret downloading TikTok, which carries an age advisory of 13. My kids are five and a half. But you learn very quickly, while working full-time with no help, that content made specifically for five year olds won’t sustain their attention for long. A lot of the kindergarten learning apps require parental involvement, and even those that don’t come with a guarantee that, 15 minutes after loading, one or both of your kids will be shouting “I’m bored”.

Conventional TV and movies might buy you another 45 minutes at most, while interactive games - which require constant parental intervention, to type in search terms or reboot after crashes - will maybe bank you an hour. In the midst of all this, the single, most reliable way to buy yourself half a day of almost-interruption-free work is the addictive 60-second video feed of TikTok.

Most of the content is harmless and dumb, no worse than YouTube. It is teens doing weird tricks with Oreos, or skateboard stunts, or dances, or bad skits - driven by a depressing desire to be famous, for sure, but no more so than the arch kid-shows on Disney.

And while some swearing gets through, as it does in real life in my house, this wasn’t an overwhelming problem, either. My kids know bad words are wrong, albeit not the end of the world, and by and large continue to respect the taboo.

The bigger issue, as the weeks went by, was the communication of a certain vocabulary and attitude. For a while, stripped of their schoolmates and teachers, my kids’ accents became more decisively English. At some point, however, attendance at the school of TikTok flipped them back to American, and not just any American, but this: “mom. Mom! MOM!”

It doesn’t matter what “this” is: dinner, clothing, any activity that isn’t screen-based. All have become subject to the dual proto-teen joys of rejection coupled with impersonation of the big girls. Vaguely sexualised language has started to creep in, so that every dance my girls do is now accompanied by the phrase, “shake your booty!” And, with the intuitive older-kid understanding of how nihilism works on parental nerves, everything that isn’t superlame, triggers the response “I don’t care”.

Very occasionally, there are moments of reprieve. For a second, when it appeared as if social justice warriors on TikTok had pranked Donald Trump by reserving tickets at his rally in Tulsa, I told myself it wasn’t an entirely appalling platform, and used it to talk to my daughters about politics, the president and protest.

And I confess to enjoying a moment of - I know, very wrongheaded - national pride when I heard one child lustily tell the other to “shit off”, the result of a British video upload advertising our still world-class standards in swearing.

For the most part, however, it has been downhill all the way. Now that I am, for a second, out of the woods with work, we have entered a period of detox. Maybe it’s not so bad, I tell myself. Maybe this is just my kids’ generation’s version of every moral panic about children and media since the invention of radio waves. Then, one morning, I hear my daughter casually tell her sister, “You have a fat ass.” And that’s it. Until the next time, there’s no alternative: we’re out.–Guardian

Turn tomatoes and feta cheese into something magical
10