Red alert: how beetroot and cherries can make you a better runner

Research shows athletes’ choice of vegetables may affect their performance 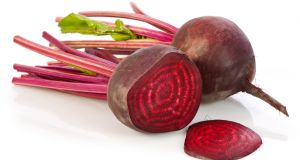 Beetroot: how might it provide a competitive edge? A large part of the answer is nitrates 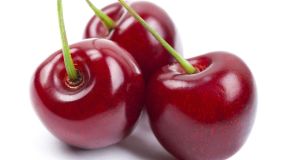 If only I’d spoken to Dr Conor Kerley before entering a 38-mile cross-country ultra-race. Dietician and postdoctoral researcher at the Heartbeat Trust and Dublin City University, Dr Kerley is also the chairperson of the scientific and research steering group of the Irish Nutrition and Dietetics Institute. He would have explained why beetroot and certain other vegetables can improve athletic performance, and how tart Montmorency cherry juice can relieve delayed onset muscle soreness (DOMS). Following my race, however, I too am an expert in this type of muscle soreness – but only in the sense of knowing how it feels: horrible.

So how might beetroot provide a competitive edge? A large part of the answer is nitrates. “Studies by my research groups and others show that nitrate-containing vegetables such as rocket, spinach and beetroot can increase the concentration of nitric oxide in the body,” says Kerley. “Nitric oxide causes human blood vessels to become bigger, allowing more blood to flow without increasing work for the heart. Better blood flow can decrease blood pressure and increase muscle function. Our research shows that this not only benefits individuals with certain heart and lung conditions – it also helps athletes by, for example, decreasing the oxygen cost of exercise.”

In a University of Exeter study, club-standard male cyclists drank 500ml of beetroot juice or 500ml of nitrate-depleted beetroot juice, 2.5 hours before 4km and 16.1km time trials. Nitrate-containing beetroot juice improved 4km and 16.1km time-trial performances by 2.8 per cent and 2.7 per cent, respectively. And in a further study undertaken at the University of Exeter, nine healthy physically active individuals were studied while both walking and engaging in moderate- and severe-intensity running following dietary supplementation with beetroot juice. The study found that short-term (four to six days) dietary supplementation with nitrate-rich beetroot juice reduced systolic blood pressure; reduced the oxygen cost of both walking and intense running; and prolonged “the time to task failure during constant-speed severe-intensity running and incremental knee-extension exercise”. Interestingly, when nitrate-depleted beetroot juice was used, the benefits conferred by the natural product did not occur, showing “that the positive physiological effects of beetroot juice ingestion on blood pressure and exercise performance are consequent to the high [concentration of] nitrate.”

When we undergo prolonged endurance exercise, muscle damage occurs because of mechanical stress, oxidative damage – a reaction to increased oxygen intake which can produce potentially harmful “free radicals” ? and inflammation, producing further oxidative damage. So what is it about tart Montmorency cherry juice that confers its muscle soreness-relieving properties? “DOMS,” explained Kerley, “is thought to be caused by inflammation resulting from muscle-cell damage. Some athletes use non-steroidal anti-inflammatory drugs (NSAIDs), such as ibuprofen, to reduce inflammation and muscle soreness. These NSAIDs inhibit an enzyme called COX-2 but they can damage the stomach and gut. However, certain foods and nutrients, such as cherries, can also inhibit COX-2, reducing inflammation. Cherries contain multiple nutrients such as antioxidants, anthocyanins, polyphenols and phytonutrients. It seems that these nutrients, together with other components of certain plant foods, can significantly reduce inflammation.”

In a major study published in the Scandinavian Journal of Medicine and Science in Sports, lead researcher Prof Glyn Howatson of Newcastle-upon-Tyne’s Northumbria University and colleagues described the effects of tart Montmorency cherry juice on 20 recreational runners who competed in the London Marathon, and who drank the juice before the event, on race day itself and two days after the race. “We found that following the London marathon, runners who consumed the cherry juice had less inflammation, less oxidative stress and maintained more muscle strength compared to those who took a placebo drink,” say Howatson. “Tart Montmorency cherry juice looks to be an excellent and natural means with which to manage postexercise fatigue and significantly enhance recovery. Conceivably, cherry juice has application for managing recovery from any strenuous physical activity.”

Reports in peer-reviewed journals also suggest that Montmorency cherry consumption confers health benefits beyond those associated with athletic performance. These include protection against heart disease, helping to maintain healthy sleep patterns and contributing to the reduction of the risk of acquiring diabetes.

Although studies on the performance-enhancing and recuperative effects of beetroot juice and cherry juice, respectively, have given encouraging results, Dr Kerley cautions that much research into the effect of nitrates on athletic performance remains to be done and, similarly, cherry juice research is in its early stages. As a dietician, Kerley is particularly interested in how whole foods affect humans. “Athletes tend to think of eating enough carbohydrates such as potatoes and pasta as well as enough protein such as meat, eggs and nuts. But it’s also important to eat a variety of vegetables which will provide the same nitrate content as beetroot. Additionally, a variety of fruits will provide nutrients similar to those in cherry juice and help decrease muscle soreness from vigorous exercise.”

Kerley also makes the important point that the benefits of nitrate-containing vegetables depend on the bacteria in your mouth and the acid in your stomach. “Therefore,” he says, “much of the benefit is lost in those who use mouthwashes or are on antibiotics. Also, medications which interfere with stomach acid can decrease the action of nitrate.”

Of course, it would be a mistake to rely on beetroot and cherries to improve performance and reduce the effects of delayed onset muscle soreness – you have to train well, too.