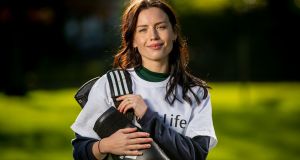 Amateur boxer Mary-Kate Slattery is no stranger to the difficulties mental health can bring. Diagnosed with anorexia at the age of nine, the athlete said she is only where she is today because of exercise.

“I think people know that exercise is good for you. It’s like when you go to the doctor because you’re feeling a bit blue or whatever, the two questions you’re asked are ‘have you slept?’ and ‘are you exercising?” Slattery said.

The 23-year-old recalled when she was sitting her Leaving Cert, and gave up sports to focus all of her energy on her studies. As a result, her mood plummeted and her mental health deteriorated. “It’s funny because, I came away from sport maybe in fifth or sixth year, when I was putting all of my energy into the Leaving Cert and my anxiety came back. I didn’t at that time realise, but it’s now in hindsight when I look back at it, I can see it was because I neglected my physical activity for those two years,” she added.

Speaking at the launch of the 2020 Irish Life Health Schools’ Fitness Challenge, a six-week programme to encourage secondary school students to take up physical activity, Slattery and Irish Olympian Hurdler Thomas Barr said the rising number of young people shows a need to remind them of how enjoyable sport can be.

Barr said with the advent of technology, it is now easier than ever to be entertained without having to move at all. “I always find that activity and exercise gives me more energy. It was always for school, it was that guilt-free hour away from the books where I could go out and get refreshed, hang out with my friends and it was a big social thing for me. I think it’s too easy now to be lazy,” Barr said.

“Like I’m guilty of it myself, go home sit on my phone for two hours aimlessly scrolling through the different apps. Whereas I don’t think when I was younger I would have done that - I would have been bored.

“If we remind kids of what that feels like, those happy hormones, it becomes an addiction then that they can do more and more. It’s going to benefit their physical and their mental health to a huge degree.”

Easier said than done, the Olympian acknowledges, but Barr believes that encouraging children to try a huge variety of sport will enable them to find the type that they enjoy the most.

“The way I found what worked for me and what I was good at was I literally tried out every single sport that I could possibly get access to. My parents were very obliging about driving me around to all the different training sessions, competitions and matches,” he said.

“Even within athletics, I tried out every event that I possibly could. I was a high jumper for years, I did javelin, I did long jump, I did short hurdles, I did sprinting, I did cross country, I did everything until I found the one that I enjoyed. I didn’t even find the one I was good at, I wasn’t good at 400 hurdles but I enjoyed it the most and that is why I stuck with it.”

“The first time I stepped into the boxing club, I was like a total fish out of water. And I didn’t know it at the time, but it has been something that has changed my life.

“What I would say to the younger people, and the women in particular, is take a chance at a sport that you might not have imagined yourself doing in a million years. Don’t limit yourself. Don’t say that’s not for me, before you even try it. Do something a bit crazy, and enjoy the craziness of it all.”