Fighting arts: Tell me about . . . Taekwondo

Focusing the mind can also help the body de-stress 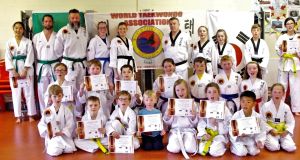 Greville Stockil (right of centre at back) with his class after a recent presentation of colour belt promotion certificates in Thurles, Co Tipperary.

Greville Stockil teaches children and adults taekwondo classes in Thurles, Co Tipperary as part of the World Taekwondo Association. Initially, learning the art himself in nearby Cashel, Stockil now passes his skills on to his daughters.

Where does Taekwondo originate?

Beginning in Korea, it is a relatively new art. Taekwondo originated really in the 1940s. Korea was under Japanese occupation up until around the end of the second World War. Kwan schools were formed, each teaching its own style of martial art, though the word Taekwondo wasn’t coined until the mid-50s. In the mid-50s, the kwans started to unite their art and the Korean Government later set up what was called the Koreans Taekwondo Association. The aim was to unify these martial arts into one art. However, they couldn’t agree and it was split into two different organisations. In 1988, Taekwondo appeared at the Olympic Games as a demonstration event and, in 2000, it become a full medal event.

It is an Olympic sport and a very popular art. Worldwide, there are around 35 million practitioners. In our association [World Taekwondo Association] we’ve about 500 members and we have 12 schools, centred around Nenagh, Co Tipperary, which is our headquarters.

What is the main focus of Taekwondo?

Like most martial arts we are trying to balance the mind and the body, and create a certain level of purpose, and give our students some confidence. That’s really done through the belt system. It’s amazing how confident you can see a student grow from when they walk in as a very shy student, and that includes adults as well, to after they get their first belt and second belt.

Power needs to be generated through skill because if you can imagine being tense the whole way through a class you are going to get very tired very quickly - so the whole idea is to relax and only apply power at the very right moment. Therefore, a lot of it is speed, apply the power, and tense at the very last second, and that takes years of training and conditioning

What would be the trademark move?

A lot of our power is generated through the hips, the legs and the arms are really there for striking and delivering the power that would be generated in the hips. In the Olympics, and in competition, you see a lot of kicking purely because you are not allowed strike with the hands to the face or to the head. You see a lot of spectacular kicks and again the power in those kicks, there’s a lot of hip movement in it.

There are belts. A lot of martial arts start in white and people think it finishes at black. There is a syllabus you have to achieve between belts and you are tested on that. We have 10 steps to getting to your first black belt – then there are nine black belt ranks. You have to have so much experience before you can progress from one black belt to the next.

In Ireland there is always one close to you. Our association, World Taekwondo Association, is headquartered in Nenagh but each of the individual schools are all under the same banner and we maintain our own Facebook pages. They include Thurles, Kilkenny, Clonmel, Ballina-Killaloe, Waterford, Ballingarry. Ask around - everyone seems to know someone that does it, or their children are involved.

I think it benefits mind and body. To get the mind to focus on something different other than work. Whether its school work, something going on at home, or what’s happening in the work place, to be able to walk away from that, put on your dobok go down to the dojang (put on your uniform, go down to the gym) and start to work out it will take you mind away - focusing on something completely different that has nothing to do with what might be bothering you.

Focusing the mind can also help the body de-stress. I think removing that stress, having some time away from it, benefits your overall health, as well as the flexibility and building of muscle you get from Taekwondo.

It can be as safe as you want it to be. Like any sport,  we are all going to get bumps bangs and bruises, these things happen. We don’t allow punching to the face, it’s completely banned. During our sparring class typically we are non-contact, but, if we do some competition sparring training, we put body protectors on everyone. During competition, yes, knocks and bruises happen, but I haven’t seen anything too bad.