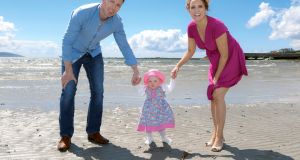 Séamus and Hazel Hughes with their daughter, Saorla, on the beach near their home in Barna, Co Galway. Photograph: Joe O’Shaughnessy

When baby Saorla Hughes cried out for her soother just before 6am one morning in early April, her mother Hazel popped it back into her mouth as was routine, but she quickly noticed her baby’s breathing sounded strange.

“We didn’t know it yet, but she was getting ready to fight for her life and was going to need a lot of help to do it. She needed an Irish healthcare system that would bring its A game. She needed a quick response from the on-call nurse in Laya Healthcare to tell us to get her in to A&E immediately. She needed an ambulance that would come quickly, multiple sound and fast clinical decisions from specialist teams in Galway University Hospital (GUH) and Temple St, luck, and some help from God. On April 5th, 2019, everything Saorla needed was provided,” Hazel explains.

The Galway mother and her husband, Séamus, are keenly aware that things could have turned out very differently for their baby if the Irish Paediatric Acute Transport Service (Ipats) had not been available that morning for Saorla. The service, which is available only 9am-5pm, Monday to Friday, operates by sending out a consultant-led/supported specialist retrieval team from Temple Street children’s hospital and Our Lady’s children’s hospital, Crumlin, to hospitals anywhere in Ireland, providing the safe, expert stabilisation and transfer of these critically ill little patients.

Ipats has been trying for some time to have this vital service expanded to a 24/7 service and Saorla’s parents want to highlight the need for this to happen. The Ipats team provides a 24/7 advice line which any hospital team doing an urgent paediatric transfer can contact if the ambulance cannot physically be there. Ipats is also involved in teaching and training in the stabilisation and transfer of these tiny patients, a very specialised skill.

“If what happened to Saorla had happened at the weekend or during the night, or if the ambulance was gone out to save another child somewhere else in the country, our little baby might not be with us today. We are so incredibly grateful that the service was available when we needed it so urgently,” Hazel says.

She says will never forget the fear on everybody’s face when her 13-month-old baby was rushed by paramedics into the resuscitation area at GUH where a team was waiting for her.

“They started aggressive treatment immediately, but very quickly all the common childhood infections and illnesses were ruled out and our little angel’s bloods were still plummeting.

“Only a couple of hours earlier, our little family had been all cuddled up in bed, Séamus in the bed beside me, and our little Saorla in her cot beside us. I was also 10 weeks pregnant and in the throes of morning sickness. Now my husband was whispering in my ear, ‘They want to know if we want the priest to come over.’”

Saorla’s blood was profoundly acidic and she was ferociously fighting to stay alive. The team in Galway, led by Dr Aisling Lyons and Dr Mark Ross, were working frantically to save her as she rapidly deteriorated. At 9am, they rang for the critical care team in Temple Street children’s hospital, led by Dr Cathy Gibbons, ICU consultant and national clinical lead for Ipats.

Hazel recalls: “We were advised to call our own parents. One of the hardest calls I ever made was to my own mother to tell her, out of the blue, that her first grandchild, her only granddaughter, was critically ill in hospital and may not make it.”

The critical care ambulance, with the consultant and her team on board, rushed from Dublin, pulling up outside GUH at 10.45am to bring Saorla to Temple Street. Just before the team pulled out of Galway, Saorla was given a B12 injection on the recommendation of Dr Joanne Hughes, a metabolic consultant in Temple Street. It was the first time her bloods had responded to any treatment and the first glimmer of hope for the baby’s terrified parents. Saorla made it safely to Dublin with the help of an exceptional ICU team.

“The horror of seeing our little girl, eyes closed, and attached to so many machines was harrowing, but the kindness all around us from all the doctors and nurses was palpable. We were prioritised for accommodation in the same block as Saorla so we could be with her as much as possible. The nurses there told us that the team from Galway was ringing all weekend. It was heart-warming,” says Hazel.

That wasn’t healthcare, it was just plain kindness

It was days before Saorla’s parents knew whether she would make it. Her parents learned that their little daughter had a rare metabolic condition that was very manageable on a low protein diet, but life-threatening without this diet. After five days, Saorla was stable enough to be transferred to the metabolic unit, where a hardworking and specialised team of doctors, nurses and allied health professionals constantly went the extra mile to make sure the Hughes’ family was coping on a daily basis.

“For example, Saorla had to start on a special diet. Dr Joanne Hughes, our consultant, was present one of the first days in the unit when we were telling the dietitian that we were struggling to get a natural yoghurt with the exact quantities of protein she had recommended. The next morning, Dr Hughes arrived in with the correct yoghurt for us. That wasn’t healthcare, it was just plain kindness.”

It was an endurance test for Hazel and Séamus to have to watch their little baby being injected and having bloods drawn over and over again. They are immensely grateful to the special person who took time out of their day to donate the blood which helped save their daughter’s life when she needed a blood transfusion.

“In the face of so much wrong with the care of our nation’s health, this was evidence to us of the expertise and the innate goodness of Irish healthcare staff. After a month in Temple Street, we got to bring our little girl home. We estimate that 40 or 50 people were involved in saving our daughter’s life and assisting her in recovery. She has still quite a bit of recovering to do but it’s all going in the right direction, thank God,” says Hazel.