Without regret, we cannot learn from our mistakes 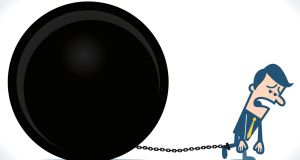 Toxic regret is exhausting, it sucks all joy and fulfilment from our days and it leaves us stuck, always looking backwards and unable to move forward in our lives.

There was once a banker in his 50s who had worked seven days a week for 25 years and become a very wealthy man. Then, at the apex of his career, he looked around him and realised that he had entirely neglected his family; as a result, his family had rejected him.

The regret was overwhelming, and came out in panic attacks every Sunday. Would this man be able to find a way out of this cruel place he had created for himself?

This man was a patient of the psychoanalyst David Morgan, of the Institute of Psychoanalysis, who spent several years helping him explore what had compelled him to work so hard and to ignore his children (he has been anonymised and gave Morgan permission to use his case).

It became clear that this need to become richer than everyone else had roots in his very early childhood, when he watched his parents nearly starve to death. He had, unconsciously, repeated this by impoverishing his children by not being there for them, in turn impoverishing himself of these loving relationships, in his efforts to overcome the traumatic poverty of his childhood.

“That complicated understanding,” Morgan explains, “freed things up, setting his regret in a generational context so he didn’t have to feel quite so guilty for acting something out, because it was beyond his ken. It doesn’t mean that he can’t feel real pain, but that pain is given a sense of history.”

This meant his regret could be understood and given meaning – and that changed his life.

Regret can be all-consuming, and it can destroy lives. We can see it all around us, whether it is the man who cannot forgive himself for cheating on his first girlfriend and has not had a serious relationship in years. Or the woman who is so tied up in wishing she’d had a child with her ex-partner instead of breaking up with him, that she cannot find happiness in her current circumstances.

It is not unusual for patients to seek therapy because they feel plagued by regret and unable to live full lives because of it, says Morgan, whether it is over affairs, career choices or relationships.

The kind of regret that brings people to his consulting room is “paranoid and persecutory. It’s: ‘Oh God, I’m so terrible, I’m dreadful,’” he says. “It is self-flagellation, and it can be incredibly damaging to our mental health. It is exhausting, it sucks all joy and fulfilment from our days and it leaves us stuck, always looking backwards and unable to move forward in our lives.”

The cognitive behaviour therapist Windy Dryden says that, when we are trapped in this cycle of regret, characterised by rigidity and inflexibility, we seem able to blame only ourselves for what has happened, rather than seeing our behaviour in a wider context and understanding why we took the path we did based on the information we had at the time. Under these conditions, regret will become toxic.

Yet, strange as it sounds, there are people for whom this kind of regret can become a safe haven, because it can protect them from the pain and risks of living a full life.

Caitríona Wrottesley, a couples psychoanalytic psychotherapist at Tavistock Relationships London, says regret can be used by some as “a defence against loving”. She describes a scenario, made up of various anonymous patients: a woman, whom I’ll call Amy, after leaving a long-term marriage, held on to her regret at having married too young and stayed too long, and was determined not to make any mistakes the next time around. Ready to make a fresh start, she signed up on various dating websites, and began going on first dates.

If you avoid doing anything that you might regret later, you will disengage from relationships, opportunities and eventually life itself

Although there were men who wanted a second date, Wrottesley explains: “There was always something about them she felt unsure about – somebody’s shyness, or a look in his eye. She was very preoccupied with getting into the right relationship, but, unconsciously, she was doing all she could to protect herself from getting into one at all, because she was terrified of repeating the disappointment and the hurt she had already endured.”

Amy was in danger of falling into another trap outlined by Dryden: if you avoid doing anything that you might regret later, you will disengage from relationships, opportunities and eventually life itself – and the irony is, there is no more powerful source of regret than that.

“Once Amy could make a shift towards allowing herself to get it wrong, she was able to move beyond the first date with a man, even though she was not sure he was entirely right for her – this was the only way she could get to know which men she liked and which she did not. We have to open ourselves up to the possibility of making mistakes and regretting them, in order to learn from the experience.

“That’s not an easy thing to do,” Wrottesley says, “but with practice, it does get easier, because the more we can allow ourselves to make mistakes, if we can learn from them, the fewer mistakes we make.”

She has seen patients like Amy go on to develop long-term, fulfilling and loving relationships. But regret does not only serve as a defence against the risk of loving – it can serve a darker purpose, allowing people to hide from the deeper pain of remorse. Morgan says: “Remorse involves insight into what one has done to others. That is the beginning of becoming aware of how one behaves and wanting to do something differently. It is a real breakthrough in therapy when people can begin to experience genuine remorse for what they’ve done. Something authentic starts to happen.”

What does it take to move from using regret as a stick with which to beat ourselves to experiencing remorse as a way forward to a better future?

Once you are occupying this more flexible frame of mind, he suggests imagining you are talking to a loved one, be it a child, friend or spouse, and to find that same space of acceptance and compassion for yourself.

It is the ability to accept yourself . . . that leads to remorse and self-knowledge

He makes a point that I find myself thinking about weeks later: “There is a tendency with regret to see the pathway you didn’t take as inevitably better than the pathway you did. It may well be that this other pathway would indeed have worked out better – but the point is that we cannot know for sure. It is that certainty, that transformation into knowledge of what can only ever really be a supposition, that is the hallmark of toxic regret.”

“It is the ability to accept yourself, to recognise that there was a wider context to your actions and to understand that you made the decisions you made based on the values and the information you had at the time, that leads to remorse and self-knowledge.”

Dryden says: “Take the psychological equivalent of cod liver oil, which doesn’t taste nice but will do you good: accept the point, difficult to swallow though it may be, that yes, it would have been nice if you had made a different choice, but you could only have acted as you did at that time in those circumstances.”

For some people – and for some regrets – Dryden says this process can be swift: he specialises in single-session therapy, where he sees clients only once to help them overcome a specific problem. For other people and other regrets, the process can take much longer.

“People who say ‘I regret nothing’ are either saints or stupid, in my view,” he says. “Regret based on flexible attitudes is the hallmark of mental health. It is a sign that you are engaged with life.”

Without regret, we cannot learn from our mistakes, and we are destined to repeat them, as with Morgan’s banker. The panic attacks and regret that brought him to therapy, Morgan says, “were a message from his soul saying something was wrong. That was the healthiest part of him.” He is proof that, as Morgan says: “There is life after regret. One can recover.” – Guardian

Terenure terraced home for €475k is ready to go
10