Regrets: do you have a few? 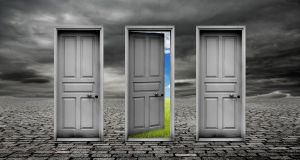 Opportunity knocks: the concept that opportunity breeds regret can be seen even in small things

Would you feel insulted if I suggested your life is fuelled by regrets, especially if you’ve made major changes that you are proud of?

You shouldn’t, because the research on regrets suggests they are powerful motivators of change when what we are regretting is something we can still do something about.

What we seem to regret most of all is missed opportunity. Indeed, the authors of one study on regret state plainly that “opportunity breeds regret”.

That review, What We Regret Most . . . and Why, by Neal J Roese and Amy Summerville of the University of Illinois, is published in Personality and Social Psychology Bulletin.

Regret is strongest when we missed out something we had a realistic opportunity to do and which we could still do. The good news is that regret is much weaker when we didn’t have a lot of choice in the matter.

For instance, in the US at any rate, the top regret is about education. If, to imagine an example, your parents were unwilling to pay for you to go to college, your regret is likely to be lower than if they were willing to pay but you didn’t take them up on it. In the first case your choices were very limited – in the second you had lots of choice but you let it go.

But education is lifelong and that sharp regret can be the motivator to do something about it later in life.

Young people are more likely to have regrets about romance

Young people are more likely to have regrets about romance because they have more opportunity than older people and they haven’t yet settled down.

Which brings me to Tinder, Grindr and co. As I understand it, they provide a world of opportunity. I wonder if, for that very reason, they also increase regret?

Imagine that in the offline world, Farmer Jones offers you the opportunity to marry any one of this seven beautiful daughters (or sons, depending). After much consideration, you choose one of them. The psychology of regrets tells us that you will get to wondering if life wouldn’t have been better if you had chosen one of the others. Whereas if Farmer Jones had only the one beautiful offspring the question, and the regret, wouldn’t arise.

But what if Farmer Jones in the form of Tinder, Grindr et al has millions of desirable offspring? Will that multiply regrets about the choices you make? We await the outcome of a research study that may never happen but I think, yes.

What does all this mean?

I think it means that if you look at your regretted, missed opportunities you should ask if you could still take up any of them. I’m talking here about opportunities that don’t involve throwing a grenade into your life or somebody else’s life, in a bad way.

To figure out what might be feasible, make one of those lists of things you would advise your younger self to do. I’m not a huge fan of these lists but I do think they would help to identify your regrets. Then see how much of that advice you can take yourself, now.

And forget about having a life in which you can say at the end, “No regrets”. A Life full of regrets might take you down more interesting paths.

– Padraig O’Morain (@PadraigOMorain) is accredited by the Irish Association for Counselling and Psychotherapy. His latest book is Kindfulness. His daily mindfulness reminder is free by email (pomorain@yahoo.com).