The evolutionary origins and physiology behind mouth to mouth kissing 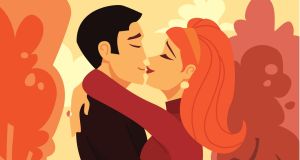 Anthropological studies suggest that kissing is an acceptable practice in up to 90 per cent of cultures. Photograph: iStock

What are the origins of kissing?

“If young lovers exploring each other’s mouths with their tongues feel the ancient comfort of parental mouth feeding, this may help them to increase their mutual trust and thereby their pair-bonding,” writes Desmond Morris in his classic book on human behaviour, Manwatching.

Is kissing unique to humans?

Yes and no. All animals groom each other in some form – dogs sniff and lick potential mates and elephants put their trunks in each other’s mouths. Most other primates use kissing as a form of conflict resolution and bonding rather than foreplay to sexual intimacy.

Bonobo apes – our closest genetic relatives – kiss both for comfort and to socialise. Sometimes, after a fight, they kiss and make up – just like humans do. In her book, The Science of Kissing: What Our Lips Are Telling Us, Sheril Kirshenbaum says kissing evolved to fulfill three essential needs: sex drive, romantic love, and attachment.

Do people kiss in all cultures?

Anthropological studies suggest that kissing is an acceptable practice in up to 90 per cent of cultures. And, those who don’t kiss usually still engage in some sort of close facial touching such as rubbing each other’s noses.

Is there a biological rational for kissing?

Some studies suggest that kissing allows a couple to get close enough to assess the scent of their kissing partner. Human scent is an indicator of our immune system involving genes known as the major histocompatibility complex (MHC) genes. The theory goes that people are attracted to a mate who has different MHC genes, who, if mated with, would potentially produce a baby with a more diverse immune system that is better able to fight disease. This, in essence, is the biological explanation for why opposites attract.

What happens to our hormones when we kiss?

Anthropologist, Helen Fisher says that when we partake in mouth-to-mouth kissing, we share saliva which has testosterone in it which enhances our sex-drive. Kissing also stimulates the brain hormones, dopamine and oxytocin– both of which promote bonding and attachment in human beings.

Well now, that’s a question that might cause arguments that require conflict resolution skills to solve. Behavioural scientist, Rafael Wlodarski found that women tend to prioritise a partner’s ability to kiss more than men do – especially when first assessing their partners for a relationship. Women also tend to view kissing as an important way to show affection in long-term relationships.

Is there a difference between platonic kissing and romantic kissing?

A silly question maybe when you consider how many people kiss each other on the cheek in greetings. But, when is a kiss not just a kiss, depends on the honesty and sincerity of the kissers.

Some people might claim to be just giving you a kiss in friendship but have romantic inclinations while others might be very romantically inclined when kissing someone who doesn’t share the same feelings. We suggest you just watch a few romantic comedies to solve this one.

Is kissing a healthy thing to do?

Yes and no. Yes, because kissing stimulates the production of the so-called happy hormones or neurotransmitters serotonin, dopamine and oxytocin while reducing the production of the stress hormone, cortisol. And no, because there are about 80 million bacteria, some harmful, some harmless - in the bodily fluids kissers exchange. But, that’s nothing compared to the bacteria passed between people shaking hands – an estimated 124 million. Maybe, that’s why the French, Italians and Dutch kiss instead of shaking hands.

What happens when couples no longer kiss passionately?

Well, it depends on what other forms of intimacy they partake in. Manwatching author Morris suggests that couples who have been bonded for a long time are less likely to indulge in prolonged intense mouth kissing. But, evolutionary psychologist, Gordon Gallup from the University of Albany says that in long-term relationships, the frequency of kissing is a good barometer of the health and wellbeing of that particular bond.