Communities working against the odds to get children cycling to school 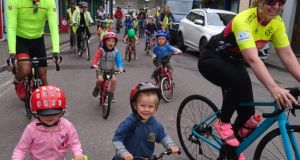 During the coronavirus lockdown, many children and adults rediscovered the pleasure of cycling. As the school year begins, cycling campaigners are working hard to get children cycling to school in spite of the often poor cycling infrastructure and traffic congestion in towns and cities across Ireland.

Allison Roberts from the Clonakilty Bicycle Festival explains how the festival hosted family fun cycles in July and August to encourage children to cycle to school. “It gives parents and children a chance to practise safe cycling and experience the joyfulness of cycling. We follow a 3km loop of the town, exploring neighbourhoods and taking back streets,” she explains.

The Clonakilty initiative is part of the “Get To School On Your Own Fuel” campaign led by cycling campaign groups throughout Ireland. The idea is that it’s exciting for children to cycle to school, but getting in some practice pays off. The campaign also hosts workshops where children can have their bikes checked out for free.

“We are also encouraging children to register on Facebook and draw out their school routes, point out any hazards or dangerous intersections. And, we want people to contact their local councillors on what can be improved,” explains Roberts.

Roberts says that like many towns across Ireland, most families live within a kilometre or so of the school but many drive because they are in a rush. “The bicycle is faster than a car. And if you practise ahead of time, wear rain jackets, children can arrive at school energised and happy,” she says.

Caitriona Corr from the Kilkenny Walking and Cycling Campaign says that 20 years ago, four out of every 10 secondary school student cycled to school in Kilkenny – making it one of the places with the highest numbers of students cycling to school in the country. However, since then, increased volumes of traffic has reduced numbers significantly and many children no longer feel safe to cycle to school.

Now, at the start of this new school year, the Kilkenny Walking and Cycling Campaign is embracing a new approach to discourage parents from bringing their cars close to the primary and secondary schools in Kilkenny. “Four years ago, the local sports partnership introduced ‘park and stride’ but it was slow to take off so this year, we’ve introduced new temporary signs with cartoon characters asking parents not to park or idle outside school gates,” explains Corr.

Corr says that schools, parents’ associations and the local council are all involved in this new initiative to reduce traffic congestion at schools in Kilkenny city. “We feel that there is an opportunity now when many parents have more flexible working arrangements. We want to have a safe school zone. We are also mapping walking routes to schools,” explains Corr.

While she says the streetscape of Kilkenny city doesn’t lend itself to closing down streets to traffic completely, she’s hopeful it will discourage parents from bringing their cars within 200m of school gates. In November 2019, Malahide, Co Dublin, became the first place in Ireland to introduce the “School Streets” concept of restricting motorised traffic outside school at drop-off and pick-up times. A report into the success of the initiative found that more children walked to school and more families parked their cars farther from the school and walked the rest of the way.

The Galway Cycle Bus is starting its third year this September, offering pick-up points to children along a defined school route in the Knocknacarra suburb of Galway city. Alan Curran says that the cycle bus exists because it’s unsafe for children to cycle on their own to school. “We’d like to see the cycle bus disappear but we’ve seen no progress on cycling infrastructure since we started in spite of engaging with city councillors, TDs and the Galway city mayor,” says Curran.

The Galway City Bus group includes about 16 children and five adults every day. Any children from first class or under who wish to join the cycling bus must be accompanied by a parent. “We do it every day – except if there is snow, ice or a wind warning. The children don’t mind the rain. We started it because we couldn’t wait for the infrastructural change but we’re disappointed that there is still no response from the council – even when we see lovely new developments such as the Dún Laoghaire Rathdown coastal cycling route,” says Curran.

And while the National Transport Authority have allocated €55 million for cycling and walking projects in large urban centres, some cycling advocates are concerned that the money might not always be spent appropriately.

Roberts says that recent funding for Clonakilty has been spent on new bike parks. “But what we need most in Clonakilty is cycling lanes. The congestion on the roads at school times is crazy. It might be a drag getting on your bike at the start but once you’re on the bike, there is a great sense of independence that is empowering,” she says.

Roberts believes that there has never been a better time for local authorities to accelerate the introduction of new measures to make “active travel” as easy and safe as possible. “We are in a changed world and we need to see changes to our roads and streets to make cycling safer all day, every day for all ages and abilities,” she says.