Parenting in my Shoes: ‘You’re in survival mode because it’s wrong to be told you can’t fix something for somebody’ 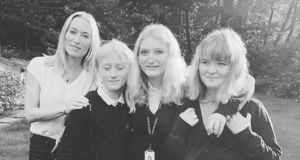 Victoria and her three children.

Lots of women might relate to actor, writer, producer and mother-of-three Victoria Smurfit’s description of childbirth as an “extreme sport” but possibly less might describe their experience as “hilarious”.

“I just kept bursting into these fits of laughter,” Smurfit explains, describing the birth of her first child Evie. “I just thought, ‘this is ridiculous – this can’t be what happens’.”

Having followed her friend’s advice to “go and enjoy” giving birth, she says that “it made such a difference. The pain is the pain but I kept on laughing, going ‘it can’t get worse – and then it did’!”

But if laughter was the sentiment on the labour ward, a newfound fear became the sentiment on the streets as Smurfit’s perception of the world changed. “Parenthood made me very aware of being mortal,” she says. “Suddenly, the world was a very scary place. I was barreling through life thinking, ‘ah sure it’ll be grand’ and then suddenly I had this tiny baby. I remember walking down Grafton Street with Evie in her pram. Her dad was pushing the pram and I’m in front of the pram waving people who are holding cigarettes ‘out of the bloody way. Just get out of the way, cigarettes at the same level as my child’s face, it’s just not acceptable.’ Suddenly there was danger everywhere.

“Anytime Evie cried, or any of them cried, it was like my ovaries were going to fall out of my body. It was a physical pain so I couldn’t let them struggle in anything that I could fix. As I found out later on in parenthood, there’s stuff that you can’t fix.

“I look back on those days and think, although they were relentlessly exhausting, they were easier because you’re in charge and you’re in control and it’s only you who they rely on.”

I was just about to start doing a play and I thought, ‘you’re just overwhelmed’

Following the birth of her third child, Flynn, she struggled with postnatal depression, something she says was unexpected.

“One day I was walking down the high street in Ranelagh to go and get my ex-husband’s shirts from the dry cleaner. It was raining cats and dogs and the dry cleaner said it wasn’t ready and I fell apart. I thought, ‘what is happening’? I’m walking down in the pouring rain from the dry cleaners to where I was living, and I was living right next to the medical centre, and in that moment my district nurse walked out and saw me sobbing my heart out and said, ‘oh God, Victoria, what’s wrong’? She swept me up, she brought me in and sat me down and said, ‘okay darling, you’re struggling’.

“Postnatal depression is not for the fainthearted,” says Smurfit. “It’s very, very real. You feel crazy. You genuinely feel crazy. There’s another person in your head and your body’s not your own and it’s quite scary because you wonder it it’ll ever go back. And you wonder if the previous you was the fake you and if this is the real you and the negative and the anxious is the real version of you.”

Her postnatal depression lasted several months. “I’m endlessly grateful to the district nurse who just gave me a way to solve it and showed me some kindness.”

When it comes to pressure on mums, and parental guilt, Smurfit says “mums and dads are on different frequencies and I think that’s done for a reason. There’s two of you dealing with different things I don’t think we should expect the dad to be like mums and the mums to be like dads.”

Smurfit thinks that “wanting to be able to work and wanting to have a life outside of parenting” has made life tougher on mums. “Our generation is probably the first that’s done it cohesively. The next generation may choose to stay at home. Having been a working mum and a full-time-at-home mum I can tell you that being a full-time-at-home mum is a much tougher gig than going to work. It is much harder, there’s no two ways about it. I go to work for a break – a thousand per cent. Because you have a singular focus.”

When filming Trial and Retribution, Smurfit says she was “getting up at 4.40 in the morning to be able to blitz all the food so that when the minder woke up with the kids and I was off arresting people at work, that she had all the food ready and that was part of my parenting guilt.

“Now she could have easily fed all the kids without a problem, but part of my parenting guilt was, ‘well if I make all the food, if I’ve done all the nurturing then that’s something’. Then you’re up all night with them and then you go back to work.

“The parenting guilt is very real and I don’t think it helps anybody really. But it’s sort of a natural state. There’s judgment in whatever you do and whatever you’re not doing. I think one of the things that made life easier was getting older and thinking, ‘I really don’t care what anybody thinks’.”

One of Smurfit’s toughest parenthood challenges came when her eldest daughter Evie was diagnosed with macular dystrophy, a genetic eye disorder. “I fell apart. I just had to go into ‘right, what’s the solution mode’? I couldn’t find one. I still can’t find one. I spent most of my nights wide awake, googling. You don’t sleep. You’re just in survival mode because it’s wrong to be told you can’t fix something for somebody.

“We found out when she was 12. She’s lost a lot of sight, her central vision. The perceived thinking is that will continue until she just has her peripherals. We are currently engaging in a trial that I’m hoping will help. We were supposed to go [to the US] and then lockdown happened.

Evie’s siblings, Ridley and Flynn, are a huge support to their big sister

“She’s an artist and she’s a creative, so sight and vision are very important to her. She’s an amazingly resilient, emotionally intelligent young lady. I’m endlessly impressed with her,” says Smurfit of Evie, who is an ambassador for fighting blindness along with her mother.

Evie’s siblings, Ridley and Flynn, are a huge support to their big sister. “They just automatically help her out,” explains Smurfit. “Ridley is incredible and I feel that at some point she probably had too much responsibility on her that I hadn’t noticed. Because they’re two sister they’re together a lot and I hadn’t realised just how much Ridley had to manage for her, simple things like, ‘no don’t cross the road now’ or ‘I’ll tell you what’s on the menu’ or ‘I’ll tell you what’s there, or go that way, don’t go this way’ ”. I think as soon as I recognised and her dad recognised how much she was doing it felt less like a burden and more just right.”

Smurfit is conscious to ensure her younger two children are not overlooked as she supports her eldest daughter.

There have been plenty of parental highs for Smurfit along the way too. One such moment was “seeing Evie speak in St James’s Palace to HRH Sophie Wessex and Sophie Wessex coming in and saying what an incredible kid. Ridley’s artistic ability is just off the chain”, says Smurfit proudly. “My kids getting their black belts. Great weeping, sobbing, OMG my kids are epic moments. And I’m also extremely impressed with how they’ve dealt with lockdown.”

When it comes to regrets, Smurfit says she wishes she’d “asked for more help. I wish I hadn’t thought I could do it all myself. I wish I’d let go of the reins a bit more. I wish I’d gone, yeah I will get a nanny or I will get help. My guilty parenting thing said I could only get help when I was working.

“I wish I had more times raising the kids around family. Going to America was fantastic,” she says. “But we created our family there and it’s really nice to be back closer to family now.”