‘I was suffering from really bad anxiety . . . but I needed to focus on the two boys’ 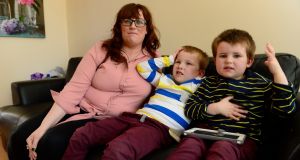 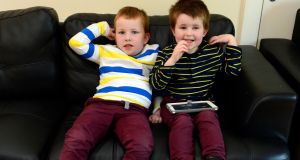 Both of Elaine Hanrahan’s sons were diagnosed with an autism spectrum disorder (ASD) on the same day in May 2014 – bringing six months of stressful waiting to a close.

“I was working full-time and I was coming to the realisation that we were dealing with not only one but possibly two with ASD,” she says, her voice breaking at the memory of that period between applying for an assessment of need for the two boys and getting the diagnoses.

Meanwhile, she and her husband, Brendan, were researching everything they could about autism to get an idea of what they might be facing.

“I couldn’t cope with work,” says Hanrahan, who had to take leave from her job as a book-keeper with the National Learning Network. “I suffered from really bad anxiety and depression as well. I needed to focus on the two boys: what to do and what to put in place for them.”

Although they have the same condition, Noah (six) and Darragh (four) are very different. Noah has a lot of sensory issues, is inclined to hand-flapping and is very, very shy. Darragh is very social but has challenging behaviours. “When he can’t cope with a situation he lashes out; Noah would be more of an anxious type – hands over the ears,” she explains.

Darragh’s diagnosis, at the age of two-and-a-half, was severe, level three, while Noah’s was level two, moderate.

Although Noah was deemed “moderate”, it was his diagnosis Hanrahan found harder to accept. While she had known that Darragh, although initially a “textbook baby”, was a bit different from the age of about 13 months, she says about his older brother: “I think I was in denial for a long time and I really thought it was just a speech and language impairment.”

She noticed around age two that Noah wasn’t really talking. “He was getting on with life but not really engaging; he had a couple of words here and there.”

When Noah was three and due to start preschool, she really struggled to toilet train him. But at least, she thought, being with 12 children in a class, his speech would come on.

In the end it was a speech and language therapist who suggested to Hanrahan that she apply for assessment of need for him, as well as Darragh, and that was how they ended up being done in parallel.

Once the diagnoses were official, Hanrahan threw herself into researching what the boys were entitled to get in the education system and what supports there might be for them as parents.

Living in Newbridge, Co Kildare, the family found their local Special Educational Needs Organiser (SENO) very helpful. They were “lucky”, she says to get a place for Noah in a special ASD preschool. “He got on really, really well. There were six pupils, two SNAs and a teacher. He got the bus to school and back, giving him that little bit of independence.” His speech also improved.

Although there was no ASD place at a primary school in Newbridge for him the following year, the Educate Together school in Kildare town opened up six new ASD places and Noah was enrolled there.

“It is an absolutely fantastic school. His teacher, Hilary, is so on the ball and she totally gets the children,” says Hanrahan.

Meanwhile, Darragh, who was too young for preschool, got four hours a day of home tuition for a year. His tutor was trained in Applied Behaviour Analysis (ABA) and she used the Picture Exchange Communication System, which is very popular with non-verbal children. “It was like a lightbulb moment,” Hanrahan says of Darragh as he started to want to talk. When he turned three, he was no longer just pointing but using words.

Although the boys have been allocated a key worker through the Network Disability Team, neither has received one-on-one occupational or speech therapy.

She believes Darragh has anxiety issues and that there are therapies that could help him. Noah has been put on a waiting list for speech therapy after being assessed at school but she expects it will be at least a year before he gets it.

Meanwhile, Hanrahan has got involved with autism support groups, such as Social Circle in Dublin 24 which runs events for ASD children and their siblings, and recently formed Kildare Autism Network. The two boys attend social skills classes every Saturday in Kill and a physical activities session for children with special needs in the local leisure centre every Monday night.

“I try to keep them as busy as possible and doing social things – as much as they can handle. You have to push to get them out of their comfort zones. If I gave in, we’d never go anywhere.”

Every day it is a matter of “staying one step ahead”, she says, thinking about what obstacles might lie ahead, taking into account the boys’ humour on that particular day and what might be done in the event of a “meltdown”. She uses pictures to explain to the boys what is planned, “because they are visual learners and seeing the pictures makes it easier for them”.

Hanrahan, who was disappointed that there was no way of recording the boys’ autism on the recent Census form, welcomes the setting up of the national autism registry. “They need that kind of data,” she says, and she hopes it will also highlight how well children with ASD can do, with the right supports. “They can give back to society and contribute like everybody else.”

She admits to worrying about what is going to happen when Noah and Darragh reach 18, but most of the time she believes in getting on with life and, “taking every hurdle as it comes”. The next hurdle is finding an ASD place for Darragh in a primary school from September, because “there is nowhere”.