Dr Muiris Houston: Got kidney stones? Hop on a rollercoaster 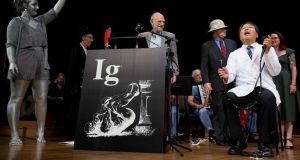 You’ve got to love quirky research. And it doesn’t get any quirkier than the annual Ig Nobel awards, a good-natured parody of the Nobel prizes. They honour “achievements that first make people laugh, and then make them think”.

The award ceremony, held at Harvard University, reinforces the theme of scientific silliness. It features mini-operas and 60-second acceptance speeches that are strictly enforced by a “Miss Sweety-Poo”, who interrupts recipients who go over-time by repeating, “Please stop. I’m bored”. Winners are obliged to present their findings twice – once in 24 seconds and the second time in just seven words.

This year’s Ig Nobel for Medicine involved a novel treatment for kidney stones. The pain of passing a kidney stone is one of the most distressing you can experience and is certainly no laughing matter for afflicted patients. But needs must, and the bizarre treatment may well be preferable to a hospital stay.

The Ig Nobel for Medicine went to Marc Mitchell and David Wartinger, for using rollercoaster rides to hasten the passage of kidney stones. Having heard anecdotal reports of people passing stones more easily while bungee jumping or riding rollercoasters, they decided to investigate.

Some years ago, one of Prof Wartinger’s patients at Michigan State University’s College of Osteopathic Medicine returned from a holiday to Walt Disney World in Florida.

The patient reported that one of his kidney stones became dislodged after a trip on the Big Thunder Mountain ride. So, to research whether it was a coincidence or not, Prof Wartinger built a silicone model of his patient’s renal system, including artificial kidney stones, and took it with him on numerous attractions.

He discovered that Big Thunder Mountain helped because it involves more up and down and side to side movements. These rattle the rider and dislodge kidney stones more effectively than rollercoasters that involve big drops – such as Space Mountain or Rock ’n’ Roller Coaster.

The prize for medical education was equally bizarre. It was awarded to a Japanese physician for a paper titled: Colonoscopy in the Sitting Position: Lessons Learned From Self-Colonoscopy by Using a Small-Caliber, Variable-Stiffness Colonoscope and published in the journal Gastrointestinal Endoscopy.

Doctors have been their own guinea pigs in many experiments through the years but my hat goes off to Dr Akira Horiuchi, for his noble(!) sacrifice. Colonoscopies are never pleasant, and are usually conducted with the patient in a supine position. So Dr Horiuchi set out to explore whether it might be better to conduct a colonoscopy while in a seated position – which he did, on himself, on four different occasions.

He said: “People, especially in Japan, are afraid of colonoscopy and they do not want to undergo colonoscopy. So the number of people who die from colorectal cancer is increasing. I do this research to make colonoscopy easier and more comfortable, so fewer people will die.”

It’s fair to say that most of us underestimate our cursing while driving. Many moons ago, a junior member of the Houston clan informed the parental driver they were using the wrong profanity. “You’re supposed to say a***hole when another driver is being silly” they pronounced from the lofty perch of the child seat in the rear of the car.

So I can empathise with the winners of the 2018 Ig Nobel for Peace, a combined Spanish/ Colombian inquiry into the frequency, motivation, and effects of shouting and cursing while driving an automobile. The recipients studied the frequency of this behaviour as well as its impact on traffic safety. Apparently, a quarter of us are particularly aggressive when it comes to shouting at other drivers. It turns out this level of aggression is associated with a higher rate of accidents.

And don’t you just love the elegant title of their paper: Shouting and Cursing While Driving: Frequency, Reasons, Perceived Risk and Punishment?