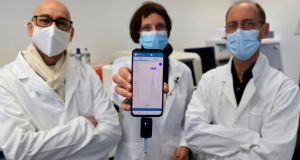 The electrochemical test, which uses nanobodies taken from the camelid group of animals, returns a result within 10 minutes and, in an early test of 300 samples, proved 90 per cent as accurate as a PCR test for both positive and negative results. It is being developed by scientists at Lille and Marseille universities and from the French national scientific research centre, CNRS.

The test does not require processing in a laboratory and the result can be read on a smartphone. “It could be mass-produced very quickly and has obvious application in hospitals and airports but also for family doctors and pharmacists,” Prof David Devos, a pharmacology professor at the University of Lille, told local media.

Highly sensitive PCR or polymerase chain reaction tests are the most reliable, widely used way of detecting Covid-19, but are expensive to perform and, because they must be processed in lab conditions, can take up to 48 hours for a result.

Cheap rapid lateral flow antigen tests, which mix a nasal or throat swab with liquid on a paper strip, typically deliver results inside half an hour, but are the subject of heated scientific debate since they tend to detect only high-viral loads so miss many people with lower levels of the virus.

The test, which will next undergo a three-month trial on 1,000 people, uses nanobodies taken from the camelid group of animals – which includes camels, llamas and alpacas – because they are more stable than antibodies from other animals.

The nanobodies detect the spike protein of the Covid-19 virus in a biological sample and react, changing the electrical current across the electrode. That change is measured by a device the size of a USB key and displayed in real time on the screen of an attached smartphone as a signal on a graph.

The height of the signal indicates whether the sample was positive or negative, Prof Szunerits told French news channel BFMTV, adding that as the method was refined further it should also be able to measure viral load and cope with virus mutations. – Guardian