Colouring up for cancer: ‘If I had ignored my smear, I don’t know where I would be right now’ 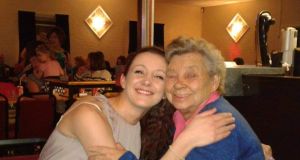 Melanie Hearns, a cervical cancer survivor, with her grandmother Mary Power, who died five years ago from stomach cancer.

By 2020, one in two people in Ireland will develop cancer in their lifetime – while current global figures show that one in five women and one in six men will be diagnosed with the disease.

Shocking statistics indeed – so it is not unreasonable to say that every one of us will be affected by cancer in some way or other throughout our lives.

During the summer, the annual Colour Dash by the Irish Cancer Society will take place in various venues around the country to raise funds for the organisation and highlight the importance of being cancer aware.

Thousands of people have signed up – and continue to do so – for their nearest event which will see runners, walkers and joggers get splashed with a dash of colour representing a different form of cancer, at every kilometre of the 5km fun run.

Melanie Hearns will be taking part in the Colour Dash in Dublin at the end of this month as she wants to highlight the importance of catching cancer early and says going through the disease was a horrible experience. “When I was 25, I received a letter from my GP asking me to go for a routine cervical smear,” says the 34-year-old, who lives in Dublin with her husband and step-daughter. “It didn’t really faze me and the thought that anything could be wrong never crossed my mind as I was a fit and healthy young lady.”

But things didn’t go as expected and a few days after the procedure she was called back for further tests.

“I was a little nervous when I went for the appointment as I didn’t really know what to expect but didn’t think about it afterwards,” says Hearns, who works in a nursing home as an activities coordinator. “Then about three days later, I got a call asking me to attend a hospital appointment the following week. I had heard of girls having to attend their GP for further tests but never heard of anyone being told to go straight to hospital – so at this point, I started to worry.

“But I went for the tests at the hospital and then next day I was asked to return again and was taken into a private room. My mam was by my side when they told me that I had stage 3 cancerous cells on my cervix and due to this being my first smear, they couldn’t tell how rapidly the cells were producing.”

Hearns was naturally devastated as she had not been expecting bad news. But she realised how fortunate she was that cancer had been detected early and that she would be a good candidate for successful treatment.

“When we heard the news, myself and Mam [Christine Dickinson] sobbed on each other – it was such a shock,” she recalls. “Then the doctors started to talk about hysterectomy but due to my age and the fact that I had no children, everyone agreed that this was a bad idea. So I went back two days later and underwent a loop excision biopsy. This was a terrifying experience, but all in all, I felt extremely lucky that it had been caught so early.

If I had ignored my smear out of fear or embarrassment, I don’t know where I would be right now

“If I had ignored my smear out of fear or embarrassment, I don’t know where I would be right now. “

Thankfully Hearns survived her cancer ordeal, but it wasn’t the first time it had reared its ugly head in her family – and unfortunately it wouldn’t be the last – as both her mother and grandmother were also diagnosed with different strains of the disease.

“My nana – Mary Power – was diagnosed with breast cancer about 15 years ago and underwent a double mastectomy,” says Hearns. “She went into remission and was doing great until about five years ago when she started to feel unwell again. She began to lose her appetite and started feeling nauseous all the time. So she visited her GP and they said it could be down to the change in her medication.

“But unfortunately she got weaker as the weeks went on and one evening she was so unwell that my uncle called for an ambulance. When she got to hospital, the doctors ran routine tests and found a tumour in her stomach. Unfortunately, by this time it was too late and the cancer had spread to all her other organs and they only gave her days to live. I was her only granddaughter so we had a very special bond and I was totally devastated.

“She opted for palliative chemotherapy and lived on for another three months – during that time she wanted to go to bingo one more time and thankfully she got her wish before she died.”

Having lost her beloved grandmother to cancer and gone through it herself, Hearns knew how cruel the disease could be, so when her mother was diagnosed with skin cancer, the awful feeling of despair returned again.

“My mam was diagnosed with skin cancer about two years ago,” she says. “She had a spot on her forehead that she just thought was a pimple but it wouldn’t go away and then it started to get bigger and bigger until one day it burst open. So she went to her GP and was referred for an appointment with a skin specialist. There the doctor took biopsies and did other tests and she was called back a few weeks later.

“I went with her to the clinic and they informed her it was cancer. The second we heard the word cancer that awful fear bubbled in our stomachs again. Fortunately, like myself, Mam can count her blessings as the cancer was removed without the need for chemotherapy and radiotherapy. But the fear is always there if a pimple ever pops up on her face.”

Hearns was helped through her cancer by her parents Christine and John and her two brothers. But she wants to make others aware of the tell-tale signs and says people should not be afraid to seek advice if they are at all worried.

“I strongly urge young girls to go and get their smear tests done,” she says. “It involves just two minutes of discomfort but it is so worth it as it could save your life. I still live with that fear every time I go for a smear but I’m so thankful when the results come back clear.

“I will be doing the Colour Dash run this month with a friend of mine as I want to raise money for the Irish Cancer Society so they can carry on doing their wonderful work – and I also want to raise awareness. I was very lucky to survive but many people are not that fortunate so, again, I urge girls to please get their smear tests.

“I will be running in memory of my nana and to support anyone going through this awful illness right now.”

– Participants in the event will be splashed with colour once during each kilometre of the race.
– The colouring is 100 per cent organic and natural and should not produce any negative effects.
– Participants are advised to wear old clothes and not wear anything which they wish to remain white.
– Also, those with bleached hair are recommended to cover it as the colours can take a few washes to come out.
– The different colours represent different cancers – yellow is for lung cancer, green is for bowel cancer, purple highlights cancer survivorship, blue represents prostate cancer, while pink is the colour for breast cancer.
– Every Colour Dash event around the country is 5km long and promises to be full of fun and colour.
– Registration is €30 per person (€5 for under-12s) and 100 per cent of funds raised will go to the Irish Cancer Society.
– Colour Dash takes place in Phoenix Park, Dublin next Sunday, June 23rd (10am). Tickets on sale now at cancer.ie/colourdash