Diagnosed with cancer in your 30s: ‘It felt surreal, like it wasn’t real life’

Fit and healthy, everything changed for Deirdre Ruane when she started developing strange symptoms 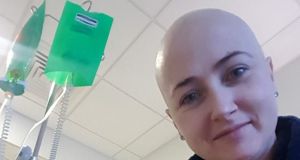 Deirdre Ruane was used to be being fit, healthy and in control of her life. So when she started developing strange symptoms a year and a half ago, she immediately went to the doctor to find out what was amiss.

“In November 2017 I lost my voice for a few days so went to the doctor and got treated for laryngitis,” says the 35-year-old. “I also had bloods taken and was told to wait for an ENT [ear, nose and throat] appointment. I also had a tight feeling in my throat at night, which was uncomfortable and a bit worrying as I couldn’t catch my breath properly – it felt like there was pressure on my trachea when I lay down and I would have to prop myself up with pillows in order to get comfortable.

“But I was still finding it difficult to get to sleep so in December 2017, I booked myself in for an ultrasound of my neck and thyroid. Nothing showed up on this but the following month at the gym, I felt as if my breath was restricted and developed a wheezy sounding chest when I woke up, as if I was a smoker. I wondered if I had asthma as I was extremely fit at the time and other than my breathing I felt fine. So I went to the doctor again and was given steroids to clear my chest. But there was no improvement over a few days so I went back again and was given a letter to take to A&E and I was relieved that I would finally get the issue sorted.”

After an eight hour wait in hospital, the social care worker had another X-ray done on her neck and also one of her chest. She was told that there was a “shadow” on her chest and she should return two days later for further tests.

“When I went back I had a bag of magazines and snacks to get me through the day as I thought I would be out by 4pm, but was met by the same A&E doctor who said it might not be a thyroid issue,” says Ruane who is originally from Mayo but lives in Dublin with her partner Simon.

“A nurse asked if my breathing was okay and offered me oxygen and this was the first time I felt scared and alone. I told her I had learned to control my breathing and that it would regulate in a few minutes. My eyes welled up with tears when she walked away and I remember wanting to contact my boyfriend, a friend or family member but I didn’t want to make a fuss or cause any unnecessary drama.”

After having a CT scan, Ruane was taken to a hospital bed and told she should contact her partner and family as she awaited further examinations.

“The day was a bit of a blur with several different consultants, nurses and doctors around me asking questions,” she recalls. “I was sent for a biopsy on my neck, which was excruciating and I fainted afterwards. I was exhausted and stayed in a ward overnight as the next afternoon the doctors took us (Ruane, her partner and family) into a room and confirmed I had a large aggressive tumour in my mediastinal area. It was behind my breastbone, close to my heart and lungs and wrapped around my aorta going from my heart to my brain. And it would need to be treated straight away.

“I was totally in shock and so upset but tried to remain strong and kept telling my parents it would be fine. I felt surreal, like it wasn’t real life. Next I had a PICC (peripherally inserted central catheter) line inserted in my right upper arm which was like an extra limb attached to me for the following eight months. Then I had heart tests, bone marrow tests and was moved to St Vincent’s cancer care ward where I received my first chemotherapy which left me exhausted and confused with motion sickness, a burning ache in my chest and extreme pain in my neck. And I was scared.”

She was discharged seven days later and told that she would have a similar stay every 21 days for the next six months. She went from being an independent, fit and active woman to being bed bound and too ill to work or even do anything more strenuous than a short walk. She also lost her hair, eyebrows and eyelashes and some teeth and experienced “chemo-induced menopause symptoms”. In short, her life had become a gruelling routine of pain and treatment – but she would eventually see light at the end of the tunnel.

“The side effects were both mentally and physically draining and I wasn’t lucky enough to save my eggs so fertility is still an unanswered question,” she admits. “During the six months I had regular X-rays, PET scans and MRIs and around halfway through my chemotherapy sessions one of the scans showed a significant reduction in the size of the tumour which was amazing news.

“However in August 2018 a PET scan showed a fifth of the tumour was still remaining. I was completely shocked - this was totally unexpected news as I was feeling fine and was sure I was going to receive the all clear. But I was sent to a heart surgeon for keyhole surgery in order to get a biopsy of the tumour and thankfully the results showed the remaining tumour was dead cells.”

Before her diagnosis, Ruane was otherwise fit and healthy and says this is what helped her through the ordeal and indeed back on her feet. And in order to prove her body has regained its strength, she is planning on climbing a mountain a month to raise awareness about cancer and funds for those who helped her through it.

Getting back to a normal routine

“After the all clear in September 2018 I slowly started back in my local gym doing light exercises, pilates and yoga,” she says. “I lost a lot of confidence during my cancer journey and wanted to rebuild that by getting my old life back, being more independent and getting back to a normal routine. Simon and I went to Iceland last November to celebrate being in remission and I have been taking things easy as cancer puts a huge strain on everything.

“But after spending time in the Mater I said I was going to give back to those who saved my life and cared for me so well. I feel my strength and fitness also helped me through my chemo and as I love the outdoors, decided to get my fitness back as soon as I was able. Hiking is my thing and I believe that fresh air is great for my mental health too. So my aim is to climb one mountain a month around Ireland. I have chosen one (per month) as I need to build myself up slowly. So far I am loving the hikes and as different people are coming along, it’s a chance to reunite with old friends and make new ones while seeing different parts of Ireland and getting fit again.

“Already we have raised over €8,500 (towards equipment at the Mater Hospital) and have climbed five mountains with another seven to go. The money raised will also go towards chemotherapy chairs used on St Vincent’s day ward which will hopefully enhance the patients’ experience and make it a bit more comfortable.”

Feeling positive about the future, the cancer survivor says her friends and family helped her through the darkest days. And she would advise anyone who is facing into a cancer journey to take one step at a time, take any help offered and try to remain positive.

“You find out who your real friends are during a time like this and I must say I have great friends and a lot of support,” she says. “They were there for me during and after treatment. If I could give advice to others going through the same thing I would say that remaining positive is key - even though some days are harder than others. I felt that cancer was both a physical and mental battle so surround yourself with positive and loving friends and family, try to keep life as normal as possible and most importantly, be kind to yourself.

“For family members or friends who have a loved one dealing with cancer, try to be there even when treatment is finished - as the battle is still not over for them.”