My 10-year-old has fallen out with a neighbour’s child – what should I do?

In resolving things, the key is to do what you can to de-escalate the dispute 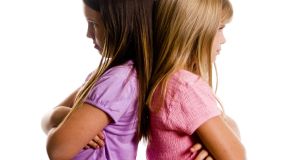 It is important to support your daughter, when any incident happens, but be careful about escalating it in any way.

Question: My daughter is 10 years old and having a really hard time with a neighbour’s daughter, who is the same age. The girls used to be good friends, but my daughter had a falling out with this girl and did not want to be her friend any more.

When I questioned why, she told me her friend kept running her down and kept saying she couldn’t do this and she couldn’t draw that, etc.

The other day, my daughter had a friend come over to play. The neighbour’s daughter accused my girl and the friend of making signs at her and swearing.

When I asked the other neighbours that were also outside, they said my daughter and her friend never said anything or did any sort of swearing. However, the father of the child made a big thing about it and said it was the fault of my child and her friend.

Then, a few days later, my daughter was at a dance class and the neighbour’s daughter and another girl were putting their tongue out at my daughter in front of me. My husband contacted the parents and told them it was not right, and that they needed to talk to their daughter. The parents said they already had and it was my daughter’s fault.

Why is this child doing this to my daughter? How do we as parents handle this, as this is really upsetting my child. It seems that it’s acceptable for their child to behave like this.

Answer: Falling in and out of friendships is part and parcel of being a 10-year-old girl and indeed friendship disputes tend to peak at this age.

Unfortunately, sometimes childhood friendship disputes can escalate and suck in other people. Other children can be asked to “take sides” which can lead to groups of children being in conflict. Parents understandably strongly defend their own children but this can lead to them being in conflict and falling out with other parents. Very quickly things can escalate out of control.

Falling out with a neighbour’s child can be particularly challenging. Whereas friendship disputes in school can be managed well by a skilled and neutral teacher or principal, in the neighbourhood there is no such independent mediator. Furthermore, you have the added complication of other neighbours being sucked in as witnesses to what happened. In addition, it can be hard to avoid neighbours, especially if the children share a playground, and this means the dispute can continue.

Support your daughter and help her respond well

It is important to support your daughter, when any incident happens, but be careful about escalating it in any way. For example, if the other girl puts her tongue out at your daughter, you can acknowledge with your daughter that it is not a nice thing to do, but encourage her to deal with it appropriately by ignoring what the girl is doing or saying something assertive. Show your daughter how to manage the situation well without retaliating or making the situation worse.

In addition, help your daughter understand what is going on by explaining what is happening in a balanced way. “It is a bit silly the way S is behaving. I think she was hurt by the end of the friendship/felt excluded when you had your other friend over and is now trying to get back at you –it is not the best way to behave.” Helping your daughter put the behaviour in perspective and modelling a calm response will help.

Be careful about how you negotiate with other parents

Criticising another parent’s child is a very difficult conversation to get right and generally I don’t advise it. Most parents are very defensive about their child’s behaviour and will naturally take their side in a dispute. Unless the other parents are reasonable and you get on well with them, it can easily go badly and make things worse. If you do talk to other parents, it is important to be be balanced in what you say (understanding their defensiveness or that your daughter may have had a part in what happened). Before having such a conversation be clear in your mind what you want to achieve (eg that the two girls stay apart, form other friendships etc).

For example, you might start a conversation: “It seems the two girls have had a falling out . Could we have a chat to help them manage it a bit better?’

Help your daughter move on

Usually the best outcome in these friendship disputes is for the children to move on and to form other friendships. Sometimes, they might return to some sort of friendship after a break, but usually they move on to other interests and friends. Discuss with your daughter how she can move on in a way that does not burn bridges. This might mean avoiding the other girl for a period (or being polite if she does bump into her), spending time with other friends and getting on with other things in her life.

– John Sharry is founder of the Parents Plus Charity and an adjunct professor at the UCD School of Psychology. He has published 14 books including Positive Parenting: Bringing up responsible, well-behaved and happy children.