Broken heart syndrome – can grief kill you, did that happen to Debbie Reynolds?

‘She said she really wanted to be with Carrie and, within 15 minutes, she faded out’ 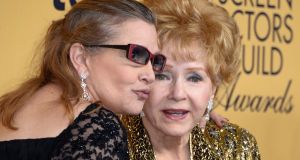 Actors Carrie Fisher and her mother Debbie Reynolds, who died within 24 hours of each other after Christmas. Photograph: Paul Buck/EPA

Am I the only one who thought that Debbie Reynolds’s passing, a day after her daughter Carrie’s sudden death from a heart attack, in some way ameliorated the tragedy of the Star Wars actor’s death? Rather than a double tragedy, it felt there was a sympathetic symmetry of sorts to the 84-year-old slipping away peacefully to be with her daughter.

“She held it together beautifully, obviously, for the last couple of days but she was under a lot of emotion and stress from the loss [of Carrie] and it’s pretty much what triggered this event,” Todd Fisher, Reynolds’s son, told E! News shortly after his mother suffered a suspected stroke and died. It was just 24 hours after losing her daughter, he said, noting that her dying wish was to be with Carrie.

Fisher subsequently told the ABC 20/20 programme that, contrary to initial media comment, his mother did not die of a broken heart. “She just left to be with Carrie . . . Carrie was a force of nature in her own right, you know,” Fisher added. “It took another force of nature to bridle and work with that and she was great with her.

“It wasn’t that she was sitting around inconsolable – not at all. She simply said that she didn’t get to see Carrie come back from London. She expressed how much she loved my sister. She then said she really wanted to be with Carrie, in those precise words and, within 15 minutes from that conversation, she faded out. Within 30 minutes, she technically was gone.”

Reynolds’s known medical history of surviving a number of small strokes in recent years, allied to the medical examiner’s decision not to carry out a postmortem, reinforces the likelihood that she died from a stress-related stroke.

While stress-related heart attack has been recognised for some time, is there any evidence of a stroke equivalent?

“Broken heart syndrome” was first identified by Japanese doctors in 1990. They named it Takotsubo syndrome, after a Japanese octopus trap that resembles the distorted shape of the left ventricle of a heart affected by the condition. The large chamber of the heart balloons out at its apex while remaining narrow at the top. This sudden ballooning occurs following a blood stream surge of the stress hormone, adrenaline.

In the past, Takotsubo syndrome was misdiagnosed as heart attack; a similar number of victims (about 5 per cent) die immediately from both conditions. However, for about three-quarters of those diagnosed with broken heart syndrome, it is a once-off episode with no chronic after-effects.

A 2014 study published in the journal Jama Internal Medicine compared 30,500 people between the ages of 60 and 89 who had recently lost spouses or partners, to 83,588 controls in the same age bracket, and found that those who had lost a loved one were more likely to suffer a heart attack or stroke within the next 30 days than their non-grieving cohorts.

The authors concluded that grief was more likely to trigger severe cardiovascular problems than other stress-related emotions, such as anger, because its physiological effects are thought to persist longer. It makes intuitive sense when blood pressure surges with stress, plaque can rupture in blood vessels in the brain – causing a stroke – just as it can in the heart.

If we move beyond the strict confines of medical science, is it possible that Reynolds in some way willed herself to die in order to “join” her daughter in an afterlife? I remember a respected professor from medical school – whom we appreciated for his readiness to relate our logicoscientific training to the voice of the real world – telling us of his experiences as medical officer to a British army Gurkha regiment. Never afraid of death, he saw Gurkha patients “turn their face to the wall” and die.

It seems Reynolds’s family believe that was her fate, too.