Market for unproven alternative medicines worth over €30bn worldwide 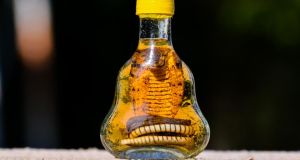 For as long as people have fallen ill, there have been others only too keen to exploit them.

History is littered with charismatic hucksters and misguided fools eager to peddle useless elixirs and ineffectual trinkets for every manner of malady imaginable, from bear-bile to magnetic bracelets. The term “snake-oil” has become something of a catch-all term for any ineffective remedy, sold with a litany of empty promises. While the phrase itself conjures up images of 19th-century fairground shysters, the troubling reality is that we live in an era where snake-oil is more abundant than ever before. And it has never been more imperative that we are able to spot it.

1 Emily Maitlis replaced as Newsnight episode host following Cummings monologue
2 Miriam Lord: Taoiseach is trapped in a Zoom session from hell
3 Bake-off: Matt Damon bids farewell to bakery as he prepares to leave Ireland
4 Trump threatens to close down social media companies after Twitter fact-check
5 Coronavirus: ESRI warns of deepest recession in Irish history
6 Tempted by a weeknight barbecue? Here’s how the pros turbocharge their grilling
7 What do you do when you meet a bear on a walk? Copy this 12-year-old
8 How is the 14-day quarantine for arrivals from overseas changing?
9 André Leon Talley: How Anna Wintour threw her right-hand man ‘under the bus’
10 Archaeologists are ‘quite sure’ they have found Red Hugh O’Donnell’s burial place
11 We need to pay very close attention to what is happening in Britain now
12 Miriam Lord: Leo’s Phoenix pecs just a storm in a bag of cans
13 Dig for remains of Red Hugh O’Donnell finds skull and coffins
14 Circus in crisis: Even if the tent goes up, the problems won’t go away
15 Cruise ship study shows prevalence of ‘silent’ Covid-19 higher than thought
16 Newton Emerson: UK is failing the people of Hong Kong for a second time
17 The Kerryman working for a charity in Melbourne: 'It's a challenging time'
18 The Saturday Poem: On the Fifth Day
19 Prof Luke O’Neill: ‘It’s definitely beatable, Covid-19’
20 A ‘really subversive idea’: Most people are pretty decent
21 Electric cars covering more kilometres than petrol models
22 Sil Fox tells of ‘months of hell’ as he is cleared of sex assault on woman in bar
23 How to make a shepherd’s pie using fantastic Irish ingredients
24 Covid-19: Tax on unemployment payment could be collected by reducing credits
25 Fintan O’Toole: Donald Trump has destroyed the country he promised to make great again
26 TikTok investigates ‘alarmingly immature’ farm stunt videos
27 Johnson rules out inquiry into lockdown breaches by Cummings
28 Leaving Cert: Teachers advised to ‘destroy’ documents relating to students’ grades
29 Trinity Biotech expects Covid-19 immunity test to be authorised shortly
30 Elon Musk rocket launch postponed due to bad weather
31 Coronavirus: Further 17 deaths reported along with 73 new cases
32 HSE figures show breakdown of 1,030 Covid-19 deaths in 167 care homes
33 Ricky Tomlinson’s criminal convictions to be re-examined
34 The human cost of Covid-19: new HSE figures reveal the toll on care homes
35 Where’s the beef? Outdated data leads to uncertainty on way forward
36 Michael Smurfit: total lockdown of economies a ‘serious mistake’
37 Officers told to prepare to deploy to DRC as fears grow for Irish contingent
38 Amy Schumer’s lockdown: ‘I watched Normal People, a beautiful show. So much sex’
39 Many Leaving Cert students likely to defer college places this year, says report
40 The Irishwoman who quit teaching to become one of Ireland’s first blues singers
Real news has value SUBSCRIBE