Are the Irish the most naive health consumers in the world? 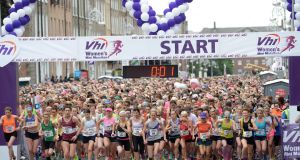 The 2017 Women’s Mini Marathon, sponsored by the VHI: “While the VHI is not perfect, it remains a not-for-profit entity.” Photograph: Dara Mac Dónaill

The Irish excel in all sorts of unusual ways. For example, could we possibly win an award for the most naive health consumers in the world?

This thought occurred as a farcical story unwound recently, generated by the chief executive of Laya and the managing director of Irish Life Health. These champions of the oppressed and downtrodden went on RTÉ Six-One News expressing concern that their customers were being “bullied” into signing away public-funded hospital care.

Their looks of sincerity and worry were so earnest that the butter substitutes (we are talking about health insurers, after all) were in no danger of melting.

Yet these two private companies are tracking the trajectory of Bupa Ireland, aggressively targeting low-risk younger insurers (remember the ads about children going free), collecting their premiums, hollowing out risk equalisation to within a micrometer of legality, and avoiding recruiting older customers who actually need care.

Oh, and they will likely either eventually fold or sell on.

After Bupa Ireland ran away with tens of millions, it was clear that managers in the sector had learned fast. Oliver Tattan, who jumped ship from the VHI, made €10 million from the sale of his start-up Vivas. A group that includes the current managing director of Irish Life Health set up GloHealth, again aggressively courting younger low-risk consumers, and then sold to Irish Life, garnering 33 million Canadian dollars (€22.3 million) for the founders. Where does this money come from?

Obviously not from thin air, so presumably it came either from present and future insurers, or else strategic structuring of debt – in the final analysis, from us taxpayers. Thirty-three million dollars could buy a lot of health services . . .

Irish healthcare consumers are clearly slow learners, requiring several iterations of being fooled before accepting their shame from the perpetrator. The chutzpah and cheek of these executives, bringing out their tiny violins for what most viewed as concern over pressure on profits rather than a deep-rooted sensibility to the rights of their subscribers.

In addition, public hospitals, while not perfect, tend to have a better sense of the need to attend to the rehabilitative elements of hospital stay and may have a longer stay (and more pressure on profits) than the treat-and-street philosophy of private hospitals.

I am appalled by what I have encountered in my rare rescue consults in private hospitals, the nadir of which was a senior nurse telling an ill, vulnerable patient that the VHI was ringing daily to say the patient’s insurance had run out.

Insurance does not run out when you are sick, and unlike the postman, the VHI does not ring even once. While the VHI is not perfect, it remains a not-for-profit entity, with a mission in the first instance of community rating, ie, the same price for everybody regardless of medical conditions.

One of the tragedies of the US health system, from which we badly need to learn, is how the for-profit insurers destroyed the not-for-profits, with the noble-minded Blue Cross sadly becoming for-profit in 1994.

As noted in a recent US review, insurance companies such as Laya and Irish Life market themselves as caregivers, confusing the public, but they are not. The companies are fundamentally investment vehicles, maximising profits to boost shareholder value and management payouts.

The naivete of the public is compounded by uncritical reporting of health correspondents of these dynamics, unreflective collusion of many health professionals (especially nursing and medicine) with for-profit healthcare, and the simplistic thinking of the politicians who developed the recent Sláintecare report.

If a private system is to function as these politicians imagine, we need a radical rethink of how it is funded and operated. A recent referral to our service from a private hospital stated bluntly that it was not safe or feasible to carry out a procedure in the private system when a patient would require pre- and postoperative rehabilitation. The private hospital requested that we facilitate through the public system!

We need to open our eyes to the vulture culture of for-profit health insurance, and demand that our politicians engage with professional and consumer bodies to reshape private healthcare to be fit for purpose, embrace its responsibilities, and ensure that money paid in is spent on healthcare and not on marketing, dividends and large pay-outs to investors and managers.

What sold for about €385,000 in Kilmainham, Glenageary, Howth and Beaumont?
Real news has value SUBSCRIBE