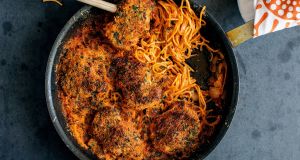 My father died last December. In his final months, he wasn’t the dad I’d known – always terrifically absorbed in anything that came up in conversation. Regardless of whom he was talking to, he would find something genuinely engrossing, an opportunity to learn a fact or communicate one. He also lost his appetite, which was equally shocking, because food remained a spring of little joys for him, even when everything else seemed pointless, painful and confusing.

A couple of weeks before he died, I cooked him Jerusalem artichoke soup. I say that I cooked, but, once he found out, through the mist of bewilderment that enfolded him, that someone was about to prepare one of his favourite dishes, he began telling my niece, who was sitting next to him, how to make it. “Sauté half an onion in olive oil,” he said in his barely heard voice. “Then add two small potatoes, and two artichokes and cook them, but not too much, with a little water and chicken bouillon. Add raw garlic, and process with a stick blender. You can add some parsley.” That’s all.

I was listening to this closely and followed his instructions to the letter.

My niece walked him to the kitchen to check if I had done a good job. My dad looked inside the pan and seemed uncertain. He sat down, had a couple of spoonfuls, and then, in an uninhibited way reserved for the very old (or the very young), passed his verdict. I hadn’t gotten it right.

Remarkably, his judgment didn’t get to me. By then, we had already reversed roles: I was the father, and he was the son. He could say whatever he wanted with the brutal honesty of a child. I really didn’t mind. My father had given me, over five decades, a love of good food, curiosity for cooking and respect for anything perfectly done. Nothing he said could take that away. I also suspected that his disappointment didn’t have to do with the actual soup, but the loss of joy from eating. (Years earlier, he’d stopped tasting the aroma of olive oil, which agonised him.) The evident satisfaction he got out of teaching was not, frustratingly, matched by the eating.

Not long after my father’s death, I went into lockdown with my husband and our two young boys, but I was far from over grieving. The loss was still alive, replaced only by more urgent needs. Lockdown also coincided with the first time my kids showed a real interest in cooking. Let’s make a lemon drizzle cake, they would say, or crispy pasta, referring to pasta al forno, the cheesy-crunchy-swirly gratin my dad used to prepare with leftover spaghetti.

Recreating this textural bliss, even when there aren’t any leftovers around, was the impetus behind my one-pan crispy spaghetti and chicken. It has a crunchy layer on top, helped by a sprinkle of Parmesan crumbs, and another one at the bottom, where the pasta touches the hot pan and fries a little. I, of course, loved it that my boys were keen to learn how to cook. Like my father, the gratification I got out of cooking food could only be surpassed by talking about it.

The lessons, though, were normally not terribly successful. My boys’ attention span did not come anywhere near the time it actually takes to cook a dish from start to finish, not to mention cleaning up. So I would remain in the kitchen, cooking, cleaning and conceding that the knowledge wasn’t quite passed down as intended.

Whatever “they” cooked gave my boys great pleasure, the kind of joy my dad was so irritated at losing. Seeing them hunched over a pan for pasta, fighting over the crispy bits as if they were gold dust and then devouring them with urgency, gave me all the comfort I needed then. The teaching could wait.

2. Add 1 tbsp oil to a large, ovenproof lidded pan or dish and heat over high flame. Season the chicken with ¾ tsp of salt and ½ tsp of pepper, then add to the hot oil, skin-side down. Cook for 7 minutes, without turning, to brown well.

3. Turn the heat down to medium-high, then stir in the onion and turn over the chicken. Cook for 5 minutes, until the onion has softened and is lightly browned. Add the tomato puree, garlic and 1 tablespoon thyme, and cook, stirring the paste into the onions, for 2 minutes, until fragrant and everything is nicely browned.

4. Add the boiling water, ½ tsp salt and ¼ tsp pepper, then add the spaghetti, stirring to submerge and evenly distribute. Use tongs to lift the chicken pieces so they sit on top of the spaghetti, skin-side up. Bring to a simmer, cover with a lid and transfer to the oven for 30 minutes, until the liquid is absorbed.

5. While the pasta is in the oven, in a small bowl, mix together the Parmesan, breadcrumbs, parsley, lemon zest and remaining 1 tablespoon thyme.

6. After the pasta has baked for 30 minutes, remove it from the oven and reset the temperature to a grill setting. Sprinkle the Parmesan breadcrumbs over the pasta and chicken, drizzle with the remaining oil and return to the centre rack and grill for 3 to 4 minutes, until nicely browned and crisp. Leave to settle for about 5 minutes before serving warm, directly from the pan. – New York Times