White-chocolate mousse cakes: a gluten-free treat sure to impress

Vanessa Greenwood: Make them in advance for effortless entertaining 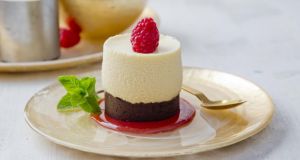 These indulgent white chocolate mousse cakes make a luxurious treat and are sure to impress. They are also gluten free. For effortless entertaining, the key is to make things in advance, so preparing these and leaving them in the fridge to set overnight is a simple and worthwhile task.

The only limiting factor is whether you have a set of steel rings since you will need between four and six depending on their size. In truth, the rings do not have to be stainless steel to make these round mousses as they are not being baked in the oven, but merely chilled to set. So feel free to improvise with any similar plastic rings you might have. I know a resourceful pastry chef who adapted slim plastic drainpipes to use as moulds. They were perfect for making hundreds of chilled mousses simultaneously.

Gelatine can be tricky to work with and recipes can often be confusing. The reason is that catering grade gelatine leaves which are used in restaurants tend to be larger in size than those purchased by home cooks. The gelatine leaves used in this recipe are the standard size and available in most supermarkets. While it is possible for gelatine to set within four hours, it is not guaranteed, as it largely depends on the size of your bakeware and temperature of your fridge. I prefer to play it safe and leave enough time for the mousse to chill and set overnight.

For the chocolate base, melt the chocolate and butter in a bain marie (in a bowl set over saucepan of gently simmering water). Once melted, remove from the heat and allow to cool slightly. Stir the egg yolk through the chocolate.

In a large mixing bowl, use an electric whisk to whisk together the egg white, sugar and salt, until stiff peaks form. Add a spoonful of the egg white mixture into the chocolate to loosen it. Next fold the remaining egg white mixture through the loosened chocolate. Transfer to a square baking tin and bake in the preheated oven for 15 minutes until risen in the centre.

In a separate bowl, set over a bain marie, whisk together the sugar, whole egg and egg yolk, whisking for five minutes until pale and doubled in size.  Remove from the heat and combine with the melted white chocolate, mixing until smooth. Set aside to cool for five minutes.

Soak the gelatine leaf in a bowl of cold water for five minutes to soften fully.  Take 50ml of the milk and heat to just below boiling in a small saucepan.  Immediately, take the soaked gelatine and squeeze out any excess water before stirring the gelatine into the hot milk. Allow to cool before adding to the white chocolate and egg mix. Stir in well.

Stiffly whip the cream and mix one third of the cream into the egg and white chocolate mixture to loosen it. Then lightly fold in the rest of the cream.

Use each ring to cut out a ring of chocolate cake (keeping it inside the base of the ring). Next, line the inside of each ring with strips of plastic. Divide the white chocolate mousse equally between the lined rings. Refrigerate and leave to set in the fridge for at least four hours or preferably overnight.

Release the mousse cakes from the rings, by running the tip of a sharp knife around the chocolate ring bases to first loosen them. Carefully slide them out of their rings and peel away the plastic. Decorate and serve chilled.

Variation
To add a festive feel, decorate with pomegranate seeds and extra white or even dark chocolate curls.