This simple dish is delicious and very little effort 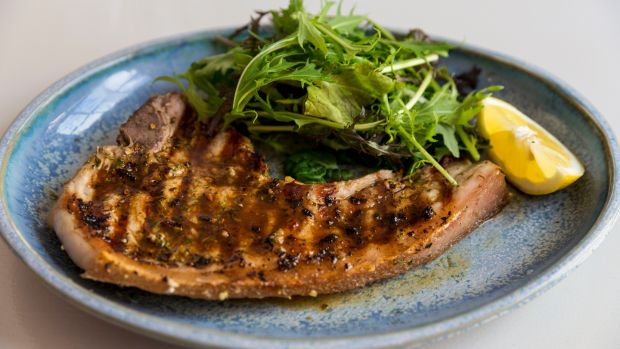 My first holiday on my own was to Portugal in the late 1980s. I spent two weeks travelling between Lisbon and Oporto by bus. I stayed in pousadas mostly, where they served local dishes. I fell in love with the broths and cabbage dishes and found myself having them most evenings after a day’s walking.

On one of my last nights, as I headed back down the coast to Lisbon, I ended up staying with a family who had put a “room to let” notice on their window. I spent two nights with them and one of the evening meals was a simple pork chop with boiled potatoes from their garden.

In the morning, the pork was oiled and coated in chopped garlic and allowed to marinade for the day. They took lemons from outside the back door and used the juice to make a sauce. As I was eating this simple dish, I was struck by how delicious it was, and with such little effort.

Nigel Slater has a similar dish where he uses rosemary or thyme, which I often use when I have access to these delicious hard herbs.

1. Place the pork chops on a tray and oil them well. Crush the cloves of garlic through a press or chop it very fine and rub it well into the oiled pork. Sprinkle well with salt. Allow to marinade for at least an hour and longer if possible.

2. Heat a frying pan that is large enough to take the four chops (or you can do them in two batches), until it starts to smoke, then add the chops one at a time.

4. Remove the meat to a plate.

5. Pour the lemon into the hot pan and allow it to simmer for a minute to reduce and take up the flavour in the pan. Taste the sauce and if it needs more flavour, add a pinch of salt and let it simmer a little longer. Pour the sauce over the chops. If your pan was too hot when you added the juice and it all disappeared just add a cup of water and let it simmer away for a few minutes.

6. Allow the meat to rest with the juice for a couple of minutes before serving.

The secret to a great brunch: just add potatoes