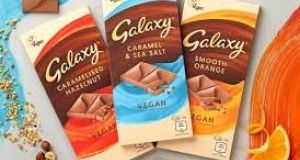 Vegan-friendly Galaxy chocolate bars go on sale in Ireland today in the first move by a large mainstream confectionery brand to offer consumers a plant-based alternative to milk chocolate. The new variant, certified by the Vegan Society, is available in three flavours: smooth orange, caramel and sea salt and caramelised hazelnut. It will go on sale online and in store at Tesco, costing €4 for a 100g bar, more than double the price of the regular Galaxy.

While all dark chocolate is naturally or “accidentally” vegan if it has not had milk or cream added to it – and is prevalent in supermarkets’ dairy-free aisles – milk chocolate is more challenging to convert because of its dairy content. Often chocolate products do not carry a vegan label because of the risk of cross-contamination when they have been made in factories where dairy and other products are used.

Mars, the UK’s second-largest confectionery brand, says it has taken more than six months to reformulate its best-selling chocolate bar, which has involved replacing dairy with hazelnut paste and rice syrup.

Guardian food writer Tamal Ray tried the new caramelised hazelnut and smooth orange bars. “I have no idea what sort of alchemical magic turns hazelnuts into cream but, whatever the process is, both bars of chocolate certainly look and feel the part: they’re smooth on the tongue and melt away to a pleasant creaminess,” he said.

“The caramelised hazelnut has crunchy little nuggets of caramelised sugar and hazelnut scattered through whilst the smooth orange has just enough citrus flavour to be pleasantly familiar without overpowering. Both are fair efforts that I doubt you would realise were vegan if you didn’t know already.”

He had one major criticism: “Neither tastes particularly chocolatey – the texture is there as are the additional flavours but the underlying taste is of some vaguely sweet thing rather than chocolate. I don’t think either of these would cure my occasional late night chocolate cravings. They are, however, about a million times better than Hershey’s.”

Linda Lopez, the head of the sensory team at Mars, said: “The taste of Galaxy has not changed in the nearly 60 years since it was launched. We wanted to retain the classic smooth and creamy taste and texture without any compromise.” The new product scored highly in its blind taste tests, she said, with consumers rating rival products (largely dark chocolate) less well because of their bitterness and/or waxy aftertaste.

Kerry Cavanaugh, the unit director of chocolate at Mars, said: “This is our first vegan product and we felt it was time to offer fans of our best-selling Galaxy brand more choice. We expect it to be very popular at Christmas for families and friends to share, as well as in Veganuary” – referring to the annual phenomenon where people embrace plant-based diets for the whole of January.

It is also Mars’ first UK and Ireland confectionery product to be wrapped in compostable film packaging. It is made from wood fibre and breaks down in home composting in a few months while the outer card sleeve is widely recyclable.

Abigail Stevens, the trademark marketing manager at the Vegan Society, said: “We’re proud to register Galaxy’s first ever non-dairy milk chocolate bars with our vegan trademark. The brand has demonstrated that dairy is not necessary to make great tasting chocolate, and that people can still enjoy their favourites without the use of animals.”

Existing vegan-friendly products are predominantly dark chocolate. The distinctive Dutch brand Tony’s Chocolonely has two vegan bars – a 70 per cent dark and dark almond sea salt – while Hotel Chocolat has expanded its vegan range in the run-up to Christmas. – Guardian