“Everyone should be entitled to eat good food on a budget. I may be mad doing this in Dublin” 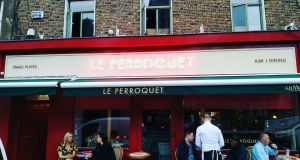 Le Perroquet, in the Upper Leeson Street location formerly occupied by The Farm, is a joint-venture between Munier, head chef Chris Fullam and businessman Frank Gleeson, with whom Munier collaborated on the opening of Pichet restaurant in Dublin a decade ago.

It is Munier’s first involvement in the restaurant business since the sudden closure in 2017 of his Temple Bar restaurant, Avenue by Nick Munier, which he describes as “a huge blow”.

Le Perroquet has a mixture of counter and table seating, with a capacity for 25 on the ground floor, and an upstairs dining room opening next week. It began serving dinner last week in a soft opening phase, and from today adds an express lunch option, with two small plates, a side order and a glass of wine, cocktail or soft drink, for a modest €16.

“The reason behind the lunch pricing is to create a lunch that is accessible to all, like they offer in France. Everyone should be entitled to eat good food on a budget. I may be mad doing this in Dublin,” Munier says. The evening menu offers a choice of 11 small plates, four sides and four desserts, with prices running from €4.50-€14.

Munier describes the food as “authentically French” but using “beautiful seasonal Irish produce”. The decor of the room leans heavily towards French bistro, with the parrot (le perroquet) a recurring theme. “The concept was derived by our desire to create a little touch of France in a bijou corner of Dublin, with an emphasis on creating a neighbourhood feel, with beautifully constructed small plates.”

“The approach to dining at Le Perroquet centres heavily around counterside dining, with a sense a theatre, and an anything goes approach to eating out. We have removed the formality of the traditional three-course dinner. We can’t use the term tapas, given that we are a French/Irish restaurant, but the delivery of the food is similar. It’s how I like to eat when I am out, a little bit of everything.”

The project, which has taken 18 months to get off the ground, marks Munier’s return to the hospitality industry – a move he puts down to the personal and professional support offered by Frank Gleeson, whose Townhouse Leisure Group has a stake in the business.

“After Avenue closed, I had to take time to process the liquidation and sort out all the ancillary things. I know it sounds dramatic, but losing your business, and effectively my financial security, having invested so much personal money into the business, felt like a huge loss.

“One of the few people in the industry that reached out to me was my old friend and business partner Frank Gleeson. After numerous cups of coffee and catch ups, Frank reignited my yearning to return to what I love most – the restaurant industry – and to start afresh.”

Despite being born in London, 51-year-old Munier credits his family ties with the heavily French influenced direction this latest project has taken him in. “My father was French and my brother and extended family still live there. I consider myself a proud French man, having served in the French army and carrying a French passport.”

Le Perroquet, at 133 Upper Leeson Street, Dublin 2, is open for dinner Tuesday to Saturday, and for lunch Tuesday to Friday.

The shoe trends to step into this spring
3

Bulling for a bargain at Spanish wine sale
6

Sealing the deal: how to buy a house at the right price
9