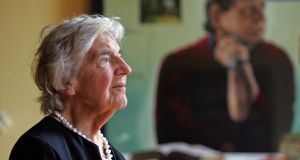 Warm tributes have been paid to Myrtle Allen, who died in Cork on Wednesday, with leading figures from the worlds of politics and gastronomy recalling her contribution to establishing Cork and Ireland as a home of wholesome, sustainable food.

Tánaiste and former minister for food Simon Coveney recalled the late Mrs Allen as “a beautiful person who had a pioneering influence on Irish hospitality, ambition and food”.

“When she and her husband, Ivan, opened a restaurant and hotel more than 50 years ago they could hardly have imagined that not only would they put Ballymaloe House on the map, but also on to supermarket shelves throughout Ireland and the world.

“Myrtle Allen’s success is down to her hard work, high standards, sheer determination and overwhelming pride in Irish produce. Many other successful Irish brands have followed the route she pioneered and the people of Cork are extremely proud of her.”

Minister for Agriculture, Food and the Marine Michael Creed described Mrs Allen as “an incredible ambassador for the Irish food industry” as he extended his sympathies to her family.

“Obviously she is associated with the iconic Ballymaloe House which symbolises everything that is good about Irish food. We now have an international image as a food island and it was the work pioneered by people like Myrtle Allen that laid the foundations for that image.”

Restaurateur and owner of the Farmgate Cafe in the English Market in Cork, Kay Harte also paid tribute, describing Mrs Allen as hugely courageous for championing local Cork produce when she first opened Ballymaloe House in the 1960s and remaining true to her principles right to the end.

“She was undoubtedly a pioneer. Ballymaloe was just a country house when she opened it and she was very brave; she had tremendous confidence to serve such simple food – it’s become a cult now but back then, that was a very courageous thing to do,” she said

“And she remained true to her principles and her politics of food, believing in local fresh produce – some people will say very some very fancy things about her legacy but for me, her legacy was simply her confidence in local food.”

“The first Irish woman to earn a Michelin star, Myrtle was a visionary who was never shy about championing the best of Irish cuisine.

“Myrtle was very involved in the local food market scene in Cork and was a committed supporter of Irish artisan food products. My thoughts go to her family of whom she was incredibly proud.”

Local Cork East TD and Minister of State David Stanton also paid tribute to Mrs Allen, again echoing the view that her most striking legacy was her championing of fresh local produce, produced in a sustainable manner which had helped put Cork on the international food map.

“She was also a lovely, lovely person. I always found her to be extraordinarily gracious and always very interested in anything to do with growing fresh wholesome food,” said Mr Stanton as he extended his sympathies to her family.