Top Irish chefs team up to cook a ‘Larder’ special 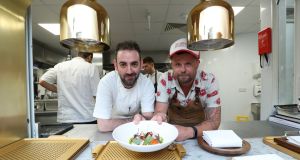 Too many chefs? Find out when Andy McFadden (left) and Robin Gill share the kitchen at Glovers Alley on Wednesday for a collaborative menu

Chefs Robin Gill and Andy McFadden are teaming up in the kitchen of Glovers Alley in Dublin 2 on Wednesday evening to collaborate on a four-course menu of dishes selected from Gill’s recent cook book debut, Larder, together with some originating in the host kitchen.

Gill, who is originally from south Co Dublin,  has three successful London restaurants, The Dairy, Sorella and Counter Culture, as well as an association with Overends restaurant at Airfield Estate, a 38-acre urban farm in Dundrum, Dublin 14, where he runs occasional master classes and pop-up dinners.

McFadden, who graduated top of his class at Tallaght Institute of Technology, has spent much of the past decade in London, with the Pied à Terre and L’Autre Pied restaurant group. He was at one time the youngest chef in London with a Michelin star. But last year he decided to return to Ireland to take on the role of executive chef patron at Glovers Alley, in the Fitzwilliam hotel.

The two chefs know each other from the London restaurant scene, and McFadden says: “I always enjoyed eating in Robin’s restaurants in London and I thought now that I’m back home, it would be a great chance for us to cook together in Dublin.”

The menu will kick off with a selection of snacks, two from each chef. Gill is serving 100-day aged beef and Dooncastle oyster tartare, and crab with Jerusalem artichoke and nori mayonnaise. McFadden is offering two of his restaurant’s most popular snacks, chicken skin with taramasalata, and Dubliner cheese and onion tartlet.

The first starter course will be a selection of Gill’s home cured charcuterie – chorizo smoked over applewood; pork, sage and chestnut salami, and pork and fennel salami – served with pickles and Glovers Alley breads.

The pickles, like just about everything else Gill serves, are made in-house, and the raw materials come from the farmland in Sussex he has been leasing for the past 18 months to grow produce for his restaurants. “All the veg is grown on food waste compost,” he says.

McFadden will also serve a starter of beet tartare with radish, mustard and truffle. The fish course, again coming from the Glovers Alley menu, will be hand dived scallop, seaweed, carrot and tomato.

For the main course, the Gill camp will serve Lamb Feast, one of the signature dishes from Larder. For this, shoulder of lamb is brined, then slow roasted and finally glazed over charcoal. Merguez sausage with fennel kimchi will be served as a side dish.

“This is the ultimate in big feast dining,” Gill says in the book. “It’s a showstopper. Invite only your nearest and dearest for this one.” For restaurant service, he says it is being cooked in exactly the same way, but “refined” for individual plating, rather than being served family-style for sharing.

Strawberry, raspberry, cream cheese and white chocolate has the stamp of Glovers Alley executive pastry chef Aoife Noonan on it, and this will be served for dessert.

The four-course menu, plus snacks, petits fours and coffee, is priced at €80. There are still some tickets available for the event, with sittings at 6.30pm and 7.30pm. Reservations are being taken on 01-2440733.