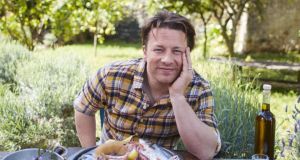 Jamie Oliver prompted a Twitter storm over the weekend with his new Punchy Jerk Rice, a sachet of microwaveable rice whose take on Caribbean flavouring has led to accusations of cultural appropriation.

Jerked pork or chicken, a dish originally developed in Jamaica by escaped African slaves, is marinated in a mix of scotch-bonnet peppers and allspice, among other ingredients, and then barbecued. Oliver’s sachets of “brown rice and kidney beans with aubergine and bell peppers in coconut jerk-style sauce” instead contain garlic, ginger and jalapenos.

“I’m just wondering do you know what Jamaican jerk actually is?” a British MP, Dawn Butler, who has Jamaican parents, asked the celebrity chef on Twitter. “It’s not just a word you put before stuff to sell products. Your jerk rice is not OK. This appropriation from Jamaica needs to stop.”

Oliver, whose series Jamie Cooks Italy has just started on Channel 4, said he used the word “jerk” to “show where he drew his culinary inspiration from”.

The Jamaican-born television chef Rustie Lee tried the Punchy Jerk Rice and told the Guardian that there’s “no such thing in the Caribbean as jerk rice”. She added: “Jerk means barbecue. So, you can’t barbecue rice. If you tried to barbecue rice on a barbecue it would fall through. It’s ridiculous.”

Lee told the newspaper: “I’ve tasted it. It’s not very nice. I don’t like it. The rice that is used in it is like a rice pudding rice.” She added: “I like Jamie, but children might see this and think it’s part of our culture. It isn’t. If he had called it Jamie’s pukka rice, or if he’d said it’s Caribbean-influenced, that would be fine, but to literally take the word jerk, when jerk means barbecue, I think he’s in a whole heap of trouble. Everyone in the Caribbean will be saying: ‘Jamie! Nooo!’ ”

#jamieoliver @jamieoliver #jerk I'm just wondering do you know what #Jamaican #jerk actually is? It's not just a word you put before stuff to sell products. @levirootsmusic should do a masterclass. Your jerk Rice is not ok. This appropriation from Jamaica needs to stop.

For a much more authentic recipe, try Donal Skehan’s jerk chicken with mango salsa, which originally appeared in The Irish Times last summer.

This Jamaican marinade/rub is guaranteed to make you feel totally tropical and infuse the chicken meat with intense and rounded heat. It’s worth sourcing scotch-bonnet chillies for this: their intense heat is what sets this marinade apart. For the salsa make sure to source tender and sweet mangos that just hold their shape.

Put the chicken in a large resealable bag and add the rest of the chicken ingredients. Seal the bag and give it a good shake until everything is completely combined and the chicken is evenly coated. Leave in the fridge to marinate for at least two hours or overnight if you have the time.

Combine all the ingredients for the salsa (except the coriander) in a mixing bowl and season with sea salt and ground black pepper. Mix through the coriander when you’re ready to serve.

Remove the chicken from the fridge 30 minutes before you are ready to cook. Get the barbecue medium hot and then cook the chicken pieces for 15 minutes, turning only once, until the chicken is completely cooked through.

The different pieces will take slightly different times to cook, so a good way to check if they are ready to eat is to insert a meat thermometer at the thickest part and check that it registers 82.2 Celsius for drumsticks and thighs and 73.9 Celsius for breasts. Serve the chicken with the mango salsa.

Irishwoman in Madrid: I just hope my loved ones remain safe and I get to see them
5

The pick of the Dublin restaurant meals to go
8