Beerista: How we consume beer is only part of the growing sustainability question 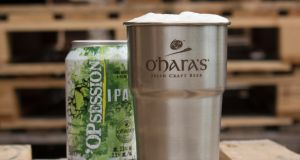 O’Hara’s introduced a reusable steel cup at a recent festival.

After a summer of worldwide heatwaves and extreme weather events, it’s probably a good time to think about beer and sustainability. These days, cans are presumed to be more environmentally friendly than bottles – but it’s a tricky one.

Cans are lighter than bottles, which is no small thing when you consider carbon emissions from transportation and how far your beer has travelled. Each can is made up of about 70 per cent recycled material, whereas this varies in bottles but they are often said to contain about 45 per cent of recycled material. Cans are also infinitely – and easily – recyclable, but bottles are not far behind.

One drawback of cans is that aluminium is extracted from bauxite ore, which is strip-mined and incredibly destructive to the natural environment, leaving toxic “tailings”, and is highly energy intensive to refine. Roughly speaking, it takes nearly 15 times the amount of energy to produce new aluminium than it does to produce new glass. Even if you take into account the amount of recycled material used in a can, the contrast of so-called embodied energy (energy used in production) in a can versus a bottle is vast.

So which is better? It’s a complex issue – and that’s even before you get into other discussions about the production of beer, water and energy usage in breweries, CO2 emissions from fermentation and how hop farms are so water intensive.

It was great to hear about O’Hara’s’ initiative to tackle the problem of plastic cups at venues and festivals with the launch of its reusable steel cup at the recent Another Love Story festival. Hopefully, this is one of many sustainable initiatives we’ll start hearing more about from the Irish beer world.

The most environmentally-friendly beer is probably a pint in your local pub – kept in a frequently re-used steel keg – and made nearby at your local craft brewery.