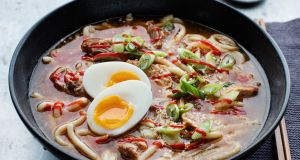 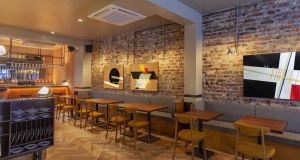 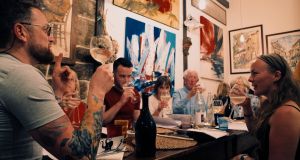 Gerry McMahon (left) with participants on an Il Vicolo wine tour in Italy. 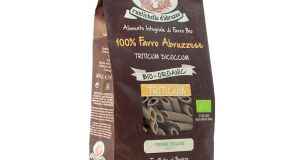 Farro, which is a type of wheat, is a good source of iron and fibre.

American soul food with an Irish twist is how restaurateurs David Coffey and Damien Quinn are describing their latest venture, Crow Street, which opens in Temple Bar, Dublin this weekend. The duo already co-own The Sussex restaurant on Leeson Street and 105 Café in Clonskeagh.

Head chef for the new venture, which seats 120 diners over two floors, including a private dining space, is Vincent Blake who joined from Medley, a private dining and events catering company.

Reclaimed vintage furniture and artworks sourced from Bauhaus Archive Gallery in Berlin have been sourced to chime with the original exposed brick walls and timber floors. Crow Street is at number one on the street whose name it takes, and opens for dinner seven nights a week, 5pm-11pm, with lunch and brunch service to come.

Good wine, fabulous food and beautiful scenery tick the boxes for what looks likely to be a memorable holiday in Italy led by Gerry McMahon, owner of Il Vicolo restaurant and wine bar in Galway.

Departing on September 3rd and again on September 24th, McMahon will take a small group on a five-night exploration of the wine regions of Tuscany. The guided tour will include four vineyard visits, a pasta-making class and sightseeing in Montepulciano and Siena, while being based at the coastal town of Porto Santo Stefano.

“I first thought of doing a wine tour after a conversation with one my suppliers, but the idea never blossomed until September 2017, when I decided to plan Il Vicolo’s first wine tour to Italy. I found a small band of wine lovers to accompany me on the trip and it was a great success,” McMahon says. He plans to add a Puglia wine tour itinerary next.

With all transfers included, and two dinners and three lunches, the trip costs €1,775 per person sharing. For more information, see ilvicolowinetours.ie, or telephone 091-530515.

Bord Bia is launching an Irish pork promotion on Monday, with the aim of inspiring families to take the #PorkNight challenge and try a new recipe once a week using Irish Quality Assured pork. There is a good selection of recipes and videos and bordbia.ie/pork, including this one for slow cooked pork ramen, which might tempt you to dust off the Crockpot after its long summer holiday.

Sheridans Cheesemongers has introduced a selection of organic pasta made from farro, one of the so-called “ancient grains” to its range. The farro spaghetti, penne and pizzichi (small diamond shapes with crimped edges to hold sauce) are from the artisanal producer Rustichella d’Abruzzo, which has been making dried pasta in the town of Pianella since 1924.

Farro, which is a type of wheat, is a good source of iron and fibre, and when cooked, it retains a chewy texture not unlike barley. Used to make dried pasta, it brings a nutty flavour and a robust texture. The three varieties of farro pasta are sold in 500g bags (€5.45), and can be ordered online at sheridanscheesemongers.com, or instore.