Alain Passard, who removed all red meat from his menus and held his Michelin stars, to cook in Ox Belfast 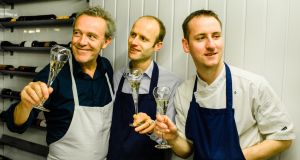 It was the last in a series of emails that made chef Stephen Toman burst out laughing. He realised one of the world’s most famous chefs was “bringing his A-game” to Belfast this weekend. Every email had dialled things up a notch. Six courses became eight. A single menu changed to a different menu each night. Side dishes were added. Toman swore loudly and laughed when he read the final flourishes in Ox wine bar with his business partner Alain Kerloc’h. “They’re all his classics. All the big dishes are happening. I can’t wait. I’m super excited about those dishes I’ve known so well and seen him do. It makes us up our game.”

The maker of those big dishes is three-star French chef Alain Passard from Paris restaurant L’Arpege. The 61-year-old will be cooking in Toman and Kerloc’h’s Ox restaurant on Sunday and Monday nights. “The whole culinary world’s gonna be looking at Belfast for two, three days because Alain Passard’s here. That is the truth. That’s not kinda blowin it up out of proportion,” Toman said talking earlier this week as he prepared for the French whirlwind in a floor-length white apron and Converse who has revolutionised how restaurants treat vegetables.

When Passard took red meat off the menu in his Paris restaurant L’Arpege in 2001 and held onto his three Michelin stars, a fork in the road was taken.

Ox business partners Toman and Kerloc’h met at L’Arpege and Toman returned again to work in the Paris kitchen before opening Ox at the end of March 2013. This weekend’s dinner with their mentor will be the second visit by the French chef, after celebrating their first birthday with a Passard meal in 2014. Since then Ox has gained a Michelin star and opened a wine bar next door.

Has Toman become the chef who weaned Belfast diners off steak, persuading them that beets can be as exciting as beef?

“Ach I dunno,” he said. “There’s still a lot of steak places going on and they’re really busy. We just wanted to do something different, just put a bit of an emphasis on other stuff rather than just beef and fish. We still love it and we use the best lamb or if the fish guy rings and says he’s got a whole turbot, do you wanna bit? We give equal kind of billing to all of them.” They still don’t serve chips. “There’s still no fryer in the kitchen. That’s our get-out clause. If someone asks ‘Can you do chips?’ Sorry we don’t have a fryer.”

“If you go to Alain Passard’s place and you get a plate of just beetroot you know this is the best beetroot in the world and it’s been treated the best way possible and that’s kind of exciting, you know, as opposed to getting the best piece of beef that the butcher worked on. It’s just kind of role reversal, making us [chefs] a wee bit more creative.”

Tickets for the £220 meal with wines sold out almost immediately, with a big demand from the industry for seats but Toman said he didn’t want it to be “all chefs”. He’s glad he didn’t time it for the actual fifth birthday in March, as the freezing spring has meant produce would not have been as plentiful. The dishes he was garnishing with flowers this time last year have been flower-free because of the weather.

The approach puts his cooking more in the hands of nature. Most of what they serve is grown in gardens close to the restaurant. “The way I do it is a wee bit backwards. I write the menus based on what produce they can get me. Don’t get me wrong I’ll use English asparagus and French morels and stuff, no problem there. As long as it’s in season but I try as much as possible to get what’s in season locally and work backwards.”

After five years has that become exhausting?

“I think we’re more enthusiastic than on day one. When you’re confident you’re more creative when you’re nervous you’re hesitant. I think that’s what it’s down to.”

It’s what he sees as the heart of Passard’s success. “You can just tell straight away that he’s passionate and he loves it still and I think that’s what drives people to his restaurant. The fact that he’s only got the one restaurant and he’s there constantly. A lot of people ask us ‘when are you gonna open the next place?’ we have no intention of opening another restaurant we’d rather focus on this and make this better every season, every season better than the last season.”

Profits from the Ox Alain Passard dinners will go to Belfast charity the Children’s Heartbeat Trust.