Kerrygold is making headlines, but there is a small army of specialist producers keeping Irish butter on the map 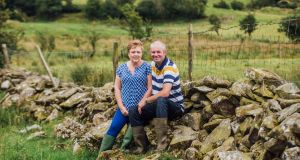 Allison and Will Abernethy, whose hand-made butter, produced in Co Down, makes its way to Michelin-starred restaurants in London.

Kerrygold, one of the major Irish food export success stories, is on target to become Ireland’s first billion-euro dairy brand. Strong sales in Germany, where it is the market leader, and the US, where it is number two in the branded butter sector, with annual sales of almost 23,000 tonnes, are driving its status as a premium product.

It is a very good butter, deserving of its reputation – built on images of pretty cows grazing on lush, green grass, and racy (for their time) advertising campaigns, dripping with gentle innuendo – as well as its great taste.

But Ireland’s renown in the field of top-quality butter production has moved on. New York-based Irish writer Siobhán Brett, writing on Tuesday for Eater, the US culinary news website, makes the point in a long-read about Kerrygold’s move into and conquering of the US market, that at home, it is not a “fancy” product, but a supermarket staple.

The real stars of the Irish butter industry now are the small-scale, artisan buttermakers whose slabs, and rolls, of creamy goodness taste of the terroir where they are made. These are so good, and so individual, that Michelin-starred restaurants in Ireland and the UK seek them out, and name check them on their menus.

The restaurant world sat up and took notice when, in 2013, a chef from Heston Blumenthal’s Fat Duck restaurant in the UK was dispatched to Dromara, Co Down to see if the butter hand-churned by Allison and Will Abernethy was as good as people said it was. A weekly order followed, and at one stage there was a fridge in the Fat Duck filled only with Abernethy butter.

The couple now make three tonnes of butter a week and have a staff of four working with them. As well as Michelin-starred restaurants – Marcus Wareing at The Berkeley and Sketch, London, now serve Abernethy butter – upmarket food stores including Fortnum & Mason in London, Ardkeen Quality Food Store in Waterford and Butler’s Pantry outlets across Dublin, also stock the couple’s range. This includes a smoked butter, and another made with dulse. Next month they will launch black garlic Abernethy butter.

“Business is great,” says Allison, who gave up her nursing career to make butter full-time. But the couple are not setting their sights further afield. “Invest NI had four Japanese buyers that wanted to come and talk to us. But we said no, we’re just so busy with the home market.”

Who's taking the horse to France?

Breda Butler took over the running of Cuinneog Irish Farmhouse Country Butter from her mother Sheila and late father Tom. The couple started the business 25 years ago, in response to local demand for “proper country butter”.

Butler explains that “country” butter differs from creamery butter in that it is made with fermented cream.

“In the old days the cream would be taken from the top of the milk, and kept for a few days, until there was enough to churn.” The cream would sour slightly while it waited to be turned into butter, giving it a characteristic flavour. “We control the fermentation, which takes four days,” Butler says, and the resulting butter “has a slightly more lactic flavour”.

Cuinneog butter is on the tables at Michelin-starred restaurants including Chapter One in Dublin, Aniar in Galway and Ox in Belfast, and was served at the State banquet on the occasion of Queen Elizabeth’s visit to Ireland. It is also available in supermarkets including SuperValu, Dunnes and Tesco.

The winner, Glenstal Irish Creamery Butter, is made in Murroe, Co Limerick by Arrabawn Co-Op. One of this butter’s points of difference is that it is made with milk from cows grazing on Irish grass, but it is sent in bulk to Belgium to be rolled and retro-packed in parchment paper.

Speaking to The Irish Times in 2012, the company said it was unaware of any Irish butter packers who could pack butter in the format it wants. “When sales reach a critical mass, then we may be able to persuade an Irish packer to make the very substantial investment necessary and purchase a suitable butter packing machine.”

A company spokesperson confirmed that it is still being packed in Belgium.

The butter, made only with “summer milk” when the cows are at pasture fulltime, from April to September, is exported to several markets including the US as well as being sold in retail outlets in Ireland.

Colin Jephson, who owns and runs Ardkeen Quality Food Store in Waterford, stocks several Irish artisan butters, including Glenilen Farm, made by Alan and Valerie Kingston in Drimoleague, Co Cork, and Tinnock Farm, made by Peggy Gaffney on her farm in Campile, Co Wexford.

Both are in regular demand, Jephson says, and his customers are willing to pay a premium for them. He sells Kerrygold for €3.60 for 454g, while the Glenilen (180g) and Tinnock Farm (227g) both cost €2.95, or almost double the price of the commercially produced product.

“They are our best sellers of the artisan ones, they sell pretty consistently,” he says. The Tinnock Farm butter is a rustic-looking product, with simple packaging. “It is, as it looks, handmade on the farm by Peggy in very small batches,” Jephson says.

At Glenilen Farm, where yoghurt, cheesecakes, cordials, clotted cream and creme fraiche are also made, butter production is on a strong upward curve. “Last year we made about 28 tonnes and this year it will be 40-41 tonnes,” says Alan Kingston. “Butter sales are definitely on the up.” Glenilen butter is formed, wrapped and packed by hand, the neat parchment roll sitting inside a cardboard box.