Afternoon tea fit for a lord (mayor) at the Shelbourne 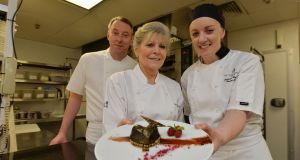 Orlaith Traynor (centre), winner of a competition to design a cake or pastry inspired by the Shelbourne hotel, pictured with her winning entry in the hotel kitchen with Garry Hughes, executive chef, and Caoimhe Hanafin, executive pastry chef. Photograph: Alan Betson

The Lord Mayor’s Lounge at The Shelbourne hotel in Dublin re-opens on Saturday, after a four-month renovation by London interior designer Guy Oliver, whose work can also be seen in the Connaught and Claridge’s hotels in London as well as No 10 Downing Street.

Between 900 and 1,000 afternoon teas are served in the lounge every week, and a nine-month research and development process has gone into a new menu, created by the hotel’s executive chef Garry Hughes and executive pastry chef Caoimhe Hanafin.

Among the first guests to enjoy the savouries, buttermilk scones, pannacotta and reimagined cheesecake, lemon drizzle and chocolate éclair pastries, will be Orlaith Traynor, winner of our competition to devise, cook and photograph a pastry that reflects the hotel’s history, and the decor of the new lounge.

Traynor, a solicitor living in Bray, Co Wicklow, was chosen as the winner for her red velvet chocolate chocolate hearts, made with beetroot and white chocolate sponge, covered in chocolate ganache.

In addition to winning afternoon tea for herself and five friends, she was treated to a day in the pastry kitchen at the hotel, refining her recipe and presentation under the guidance of Hanafin. The cakes will be cooked by the pastry kitchen for the winner and her friends.

“The standard of entry was high. I felt like I should be sending out job applications to some of them,” said Hughes, who revealed that the competition came down to a decision between the winning cake and one other. “We cooked it last week to make sure we were happy with the flavour of the cake,” he said.

“I started by thinking about what my friends and I, who meet up a couple of times a year for afternoon tea, would like to have,” said Traynor. “It had to be themed with the hotel, so I was thinking old fashioned and classic.”

Chocolate and red velvet were chosen to reflect the opulence of the lounge and gold accents reflected the colour palette of the room.

Traynor says her winning recipe “evolved from different recipes”, and results in a cake that is very moist and light. “The beetroot makes it red; I don’t like to use artificial colourings. You don’t actually see the white chocolate, you melt it and blend it into the beetroot and that gets mixed into the sponge.”

As the winner of a schools’ rock bun baking contest when she was 12, and the Ireland regional winner of Good Housekeeping magazine’s Women of the Nineties competition in 1993, Traynor is an accomplished cook.

She plans to debut her winning pastries at a dinner party she is hosting with her husband Michael for eight guests tonight. “I’ll take the day off work to get everything ready,” she says.

Traynor cooks her recipe in Le Creuset mini ramekins. “But the hotel had heart-shaped silicone moulds and they came out of those very easily, so I might invest.” Her recipe makes 10-12 small cakes.

Method: Place the beetroot in a covered bowl in a microwave and cook on high for three minutes. Add the broken up white chocolate and leave to melt with the beetroot. Blend with a hand blender until smooth and mushy. Leave to cool. Whisk the eggs and sugar until thick and the whisk leaves a trail. Sieve the dry ingredients and fold them into the egg mixture. Fold in the beetroot mixture.

Place the mixture in greased and lined heart shape moulds and bake at 160 degrees Celsius for 25 to 30 minutes, until a skewer inserted comes out clean. Leave to cool for an hour in moulds, then turn them out.

To make the chocolate ganache, melt the dark chocolate with the unsalted butter and golden syrup. Allow this to cool slightly, then pour it over the heart-shaped cakes.

Michael Harding: I sat alone in my room, even though I wasn’t in isolation
10