The race to save Ireland's fruit and vegetable harvest

Jackie Leonard & Sons is one of Dublin's oldest fruit and vegetable whole-sellers and has been forced to adapt due to the downturn caused by Covid-19. Video: Enda O'Dowd 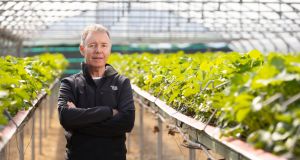 John Green of Green’s Berry Farm, Gorey, Co Wexford, used to sell 75 per cent of his strawberries to supermarkets. Now he’s reversed that and 75 per cent of the crop is bought by customers who come to his farm. Photograph: Patrick Browne

As our world reached collectively for its duvet last month John Green was doing the opposite with his 100,000 plants. The Wexford strawberry farmer keeps his early crop swaddled in fleece in a warm polytunnel to coddle them into fruiting on May 1st.

But when lockdown loomed he stripped off all the fleece and opened the doors to the crisp spring air. It became suddenly crucial to slow down the arrival of these first Irish strawberries.

His first worry was a lack of customers to drive through the gates of Green’s Berry Farm in May. His next worry was how to fly his Slovakian, Polish and Ukrainian workers to Ireland two weeks in advance to quarantine them before they started picking.

Plunging his young plants into chillier conditions has hopefully pushed his harvest out to June 1st. But travel restrictions now look set to remain in place. Irish students who might have been waiting tables on a J1 might be strawberry picking in Wexford instead.

Covid-19 began in a food market in China and is sending ripples throughout our global food system. The fabric is stretched, and the pandemic could change what we consider to be the norm in supermarkets.

Food miles we know about. But the human miles in our food chain are suddenly snapping into view. And the journeys made by workers from poorer countries to pick, pack and ship the produce aren’t as frictionless or invisible as they once were.

Green has been a fruit farmer since 1987. The Irish strawberry farm from that era is unrecognisable. Thanks to polytunnels, swaddling early crops and chilling down later ones, the season has swelled from three weeks in July to a six-month span from May to October.

What’s happened in Wexford with strawberries is replicated worldwide with fruit and vegetable growing pushed to produce more for longer. It’s how we have supermarket year-round abundance. That may also be changed by Covid.

It’s been 18 years since Green last had an Irish workforce. “I distinctly remember standing in 14 acres of strawberries to pick at 8.30am. It started to rain and by 10.30 I was the only one left in the field.” So many parents arrived to pick up their teenagers, the farm gate was blocked with cars.

Green can hire Irish students but he has a loyalty to the 35 workers, mainly women, who come every year to live and work on his farm. They can also can pick faster and for longer than inexperienced pickers. His best pickers earn wages of between €750 and €1,000 a week, upwards of treble their monthly earnings at home.

British farms need as many as 100,000 migrant workers for fruit and vegetable harvests. “Over there, growers are getting together,” Green says. Private charters may be commissioned to fly in the under-appreciated workforce that keeps shelves stocked.

Ireland has just 160 commercial fruit and vegetable growers, and that number is falling. “Up to 80 per cent of our domestic supply is grown by around 50 of those growers,” broccoli farmer and IFA horticulture representative Paul Brophy says.

We are critically dependent on Spanish and Italian and Dutch farmers for vegetables we consider basic provisions. There is a single grower producing scallions commercially in Ireland, Brophy says. Another lone Irish producer grows iceberg lettuces.

The market has decided this. “Supermarkets want local products at global prices,” one grower says, afraid to be identified as someone critical of supermarkets’ power. The 49 cent vegetable offers introduced by the German discounters and mimicked by the other players have squeezed growers’ margins as never before, this farmer says.

The cost of cheap vegetables is a massive Irish dependence on imports and cheap labour. According to Safefood Ireland, the bulk of the €5 billion annual food imports into Ireland are cereals, fruits and vegetables.

The last remaining Irish growers have had to reduce their labour costs at home to try to compete. Brophy estimates Irish growers rely on 3,000 to 4,000 seasonal workers from Europe to harvest Irish fruit and vegetable crops. Workers from Romania have been on his farm since last month to start planting.

At the height of his harvest he needs an additional 50 people. Broccoli harvesting is not as easy as strawberry-picking, which is predominantly done in tunnels at waist height.

“It’s heavy physical work. It’s repetitive, it’s boring and you’re out in all weathers.” He reckons he would need 100 students to do the work of his 70 experienced harvesters.

“What will absolutely throw a bomb into this is the weather issue,” Brophy says. Drought or torrential rain could stress the system to its limits. How will consumers react if a vegetable that was “always there” disappears?

On his farm in Tipperary, Con Traas is having a more relaxing season than most growers. Blossom time can be stressful, but the weather forecast is for warm weather which is perfect for his apple trees. Frosts are his nightmare. Poland is the biggest apple producer in Europe, and last year had 44 per cent fewer apples after a severe cold snap in spring.

Traas will need to hire five or six students during his harvests on top of his 20 full-time staff. His farm is mixed, with a couple of acres of soft fruit, plums, cherries and apples. Trade in his farm shop has been slow but there are fewer apples left in storage by now anyway. His juice business has been hit by the closure of cafes and restaurants.

He’s hoping that by the time his apples are ready to pick in the autumn “things will be more normal.”

Back in Wexford, John Green used to sell 75 per cent of his strawberries to supermarkets. Now he’s reversed that and 75 per cent of the crop is bought by customers who come to his farm. Last year, he had 40,000 cars through the gates.

“We can grow a Spanish-style strawberry. But it’ll be turnip-y and hard, have a six or eight day shelf life,” he says. He has seen Irish consumers remain loyal to the Irish strawberry even when there’s a cheaper one on the shelf.

It’s all down to the taste. The luxury of being able to buy something for its flavour is something we all hope will weather the Covid storm.