The great cafe war: He thought he was the best customer ever — but was he?

One man crowned himself his local cafe’s No 1 customer. But things soon escalated 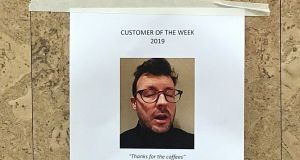 It all started on Monday when Fraser Harvey walked into his local cafe in Melbourne’s city centre.

To mark his constant visits to the Sensory Lab coffee shop, he put up a small poster that crowned him as its favourite customer.

But what began as a fairly uncontroversial, albeit quirky, statement soon became a quest, then an obsession, which has so far involved a projector, bespoke loyalty cards, custom uniforms — and an anonymous nemesis who refused to give up.

Two hours after Harvey put up his picture, he returned to find someone had usurped him. A framed certificate claimed an anonymous rival was “Customer of the week (Every week)”.

It was just the first of many shocks for Harvey, in what has become a week-long battle with the unknown.

In an escalating series of antics, Harvey returned with his own frame — an even bigger one.

But then his tormenter-in-chief obtained equipment to project her face over the entire store.

On Thursday Harvey told the Guardian he had finally put a stop to the madness — by printing cards for the Fraser Harvey Memorial Coffee Loyalty Programme, and crafting shirts for the staff with his face on them.

The Melbourne resident declared victory and said he hoped this brought an end to the shenanigans.

“I think that I can speak on behalf of the staff too when I say that I am certainly No 1 now,” he said. “The establishment of the Fraser Harvey Memorial Coffee Loyalty Programme only further solidifies the status.”

He added: “A lot of people are asking me why it’s a memorial programme when I’m still alive. It’s gravitas. Really commands the respect of the other customers.”

The saga has delighted onlookers — both in person and online — but Harvey said he still knew nothing about his rival. “We have never met, but I’m sure it would be incredibly thrilling for her to meet Sensory Lab’s No 1 customer,” he said.

The founder of Sensory Lab, Salvatore Malatesta, said that in his 25 years in hospitality, the rivalry was “the most exciting thing I’ve ever seen” — and no hoax.

“When I first saw it, I thought it was two creative agencies setting each other up,” he told Guardian Australia. “Or I thought they must know each other, they work in the same office. But they’ve never met.”

He revealed that Harvey’s foe was, in fact, an urban planner.

As for Harvey, the Melburnian said he had been hurt when he walked into the cafe on Monday to see the visage of his antagonist projected on to the wall.

“I was fairly appalled. I knew I wasn’t just dealing with anyone. But I was also dealing with just anyone — if you know what I mean.

“The staff clearly had a lapse in judgment in allowing that to happen but I have accepted an apology in the form of a jam donut.”

Malatesta was able to shed more light: “Customers were weirding the fuck out. Because she wheeled in that projector. She was there, you know, trying to get her face exactly where she wanted it. If only they’d filmed it. It’s like a Seinfeld episode.”

Despite the glossy finish of his cards and fine stitchwork of his shirts, Harvey said they had only taken 10 minutes to get made, and he was prepared to do more if required.

“I have measures in place should things escalate further. I’ve thought about it extensively. When you are at the top you can’t just rest on your laurels, you’ve got to be vigilant all the time.

“The cost of freedom is eternal vigilance, and a small soy flat white.” – Guardian