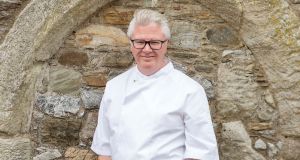 The West Waterford Festival of Food has temporarily relaunched as a virtual and socially distanced event for 2021, under the banner Festival Spirit, and will run from April 23rd to 25th.

There are 10 workshops, curated talks, experiences and events planned for the three-day festival, including the opportunity to purchase a meal kit that is a collaboration between some of the area’s top restaurants and food producers. The Taste of the Festival six-course menu for two costs €165 including nationwide delivery on Friday, April 23rd.

The programme also includes a craft beer tasting and a cider tasting party, both conducted online. Non-ticketed online events include a cocktail masterclass and a film, Forage and Feast from Land to Sea, presented by Michael Kelly of GIY and the Irish Times food columnist Paul Flynn, which can be viewed throughout the festival weekend.

Flynn, who runs the Tannery restaurant, Ian Doyle of Cliff House Hotel, Roisin Horsom of Crew’s Restaurant and Judit McNally of Ormond’s are collaborating on the Taste of the Festival menu, full details of which can be seen here. The meal kit will also include an aperitif cocktail from Blackwater Distillery created by mixologist, John Coleman, in collaboration with The Old Bank Dungarvan.

The festival will also see the launch of a shopping portal, Taste Waterford, that will make some of the region’s food available to purchase online. The full programme of events, and bookings for tickets and meal kits, are here.