Is all feta Greek?

Now We Know: Made in Greece for 1,000 years using sheep’s and goat’s milk, the country fought a long battle for its right to the name 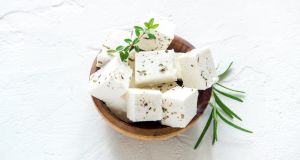 Real-deal feta is made either from sheep’s milk, or from a mixture of sheep and goat’s milk. Photograph: iStock

We love feta on our avocado and toast, or in a beetroot salad, or crumbled over roasted summer vegetables. But is our feta really feta? Or have we been eating Greek-style cheese all this time?

The real-deal feta is made either from sheep’s milk, or from a mixture of sheep and goat’s milk, and is essentially a brined curd, matured in brine for anything from two to 12 months.

Feta, which translates literally as “slice”, is of course associated with Greece, and the connection goes back a long way. Among the earliest records of cheesemaking in ancient Greece are in Homer’s Odyssey. According to the myth, Cyclops Polyphemus was the first to prepare the prototype feta by transporting the milk from his sheep in skin bags made from the sheep’s stomach. The story goes that one day, by accident, the milk had curdled and turned into a cheese, and more importantly, it tasted great.

In the 20th century, as our access to food catapulted into a truly global enterprise, producers from all over the world were making and selling feta. So what was the big deal? Food is for everyone, right? Well, more often than not, the global feta was being made with cow’s milk. Depending on who you talk to, swapping sheep’s milk for cow’s milk is an abomination of a 1,000-year-old food culture.

In the 1990s, the Greek government embarked on what would be nearly a decade-long legal battle to have the name feta become a protected designation of origin (PDO) by the European Union, similar to Champagne and prosciutto. The backlash against this movement was led by the Danes, who fought it at the European Union courts in an effort to protect their own feta industry, which produced cheese using cow’s milk. At that time, Denmark produced more feta than any other country, including Greece.

Feta was finally deemed a PDO in October 2002, thus marking feta within the European Union to mean brined cheese made with sheep’s milk, or sheep’s and goat’s milk, made in particular regions in Greece including Peloponnese, central Greece, Epirus, Thessaly, Macedonia, Thrace and the islands of Lesvos and Cephalonia.

There were concerns at the time about the impact of this ruling. Would it spur on other countries to claim ownership of cheeses? For instance, Britain and Cheddar? Though the ruling certainly had an impact on Irish farmhouse cheesemakers producing feta at that time, the fears about other countries following suit have not yet come to pass in as impactful a way.

So the answer is, yes, all feta is Greek. Dunnes Stores sell an exceptionally creamy feta which is made for them in Greece. Sheridans Cheesemongers stock a barrel-aged feta made with sheep's and goat’s milk by Kolios Greek Dairy in Kilkis, northern Greece.

It should be noted, however, that not all feta is better than all the Greek-style cheeses out there. Some of our favourite Greek-style cheeses include St Tola’s version, which is made with 100 per cent Irish goat’s milk, and which is available in Dunnes and most good food stores. You can visit St Tola’s Irish goat cheese farm in the Burren by booking a tour on its website, st-tola.ie.