Rosita Boland: I learned to be a better person in Bewley’s

I spent hours in the Dublin cafe, yet no waitress ever tried to clear my table as I sat there 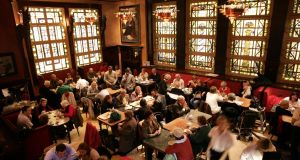 The closure of Bewley’s Oriental Cafe, on Grafton Street in Dublin, makes me achingly sad. It has closed before for long periods, and reopened with different configurations and different offerings and different experiences, such as having to queue before being directed to a table instead of wandering around and choosing your own. I tolerated all these changes, because what remained was still so special: the wonderful open fires, the elegant red-velvet banquettes, the glorious Harry Clarke windows, with their exotic birds and butterflies.

The knowledge that this closure is permanent, because of a combination of high rent and the effects of the Covid-19 crisis, including the need for social distancing in the near future, as well as whatever other economic factors are playing out, is horrible. We saw what happened to the Bewley’s on Westmoreland Street, not far away, when that closed, in 2004. The site turned into a mash-up of a Starbucks cafe, a TGI Fridays restaurant and the Fleet Street Hotel.

I trailed in Aunt Maine’s wake, and learned early on from her how to interact with the waitresses who took our orders; she had a kind inquiry and a warm thank you for each of them

I loved the Westmoreland Street branch, too, but it’s the Grafton Street cafe that always dazzled me, largely because of those magnificent windows, and the amber light they cast in that high, wooden space that smelt of coal and coffee and cherry buns. I spent every Sunday morning of my childhood, in the west of Ireland, staring at the religious-themed stained-glass windows in our local church. Seeing Harry Clarke’s windows for the first time in Bewley’s was an aesthetic shock so profound and joyful I can still recall it. Instead of the Crucifixion, and saints and haloes, I was looking at fantastical birds and flowers and butterflies like none I had ever seen in real life.

It was my late Aunt Maine who brought me first to Bewley’s. With her long silver hair, distinctive overcoats and bulging academic briefcase – she was the first woman I ever saw carrying one – she swept through the cafe like a queen. I trailed in her wake, and learned early on from her how to interact with the waitresses who took our orders; she had a kind inquiry and a warm thank you for each of them.

It was an era when the lift operated by folding metal-grille doors, and when small cakes, buns and pastries were carried to the table on a cake stand, for you to choose one. My choices rotated over the years between cherry buns, coffee slices and almond buns, a trio of picks that never changed.

When I went to college I spent hours and hours in Bewley’s, often alone. I wrote my diary there. I read novels for coursework there. I waited for a customer to finish reading the cafe’s Irish Times, watching until they hung it up again from its wooden rod, and then I would pounce. I probably only ever bought one coffee at a time, or one pot of lapsang souchong, and I knew even then that this was hardly contributing to the cafe’s profits, especially given the amount of time for which I occupied my seat.

And yet I never failed to appreciate the fact that no waitress ever attempted to clear my table while I was sitting there. I was only a student, with little disposable income, but I belonged there just the same, to this flagship cafe in the city. It was the same for the people on the fringes of society who came in during the winter and fell asleep, undisturbed, in the banquettes near the fire; the tramps and the people not quite well in the head, as my aunt would have said.

Even then I knew this remarkable and inclusive tolerance both of customers who sometimes smelled bad, or talked to themselves, and of customers who sat for a long time while buying very little was unusual, and could not last forever. And so it has proved.

But for me, anyway, its legacy goes beyond simply buns and coffee in a gorgeous setting. I think I learned to be a better person in Bewley’s, first from gleaning invaluable social manners from my aunt, and then from understanding via the people who worked there, and the ethos of that time, what composes a truly inclusive society.