Review: Suesey Street has an old club name, but a new foodie attitude 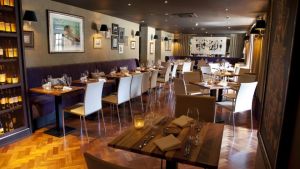 Like the Sixties, if you remember Sleazy Street – sorry, Suesey Street – you probably weren’t there. But the Leeson Street nightclub of 1980s and 1990s Dublin is back. Well, not really. The restaurant formerly known as Brasserie Le Pont has taken on the name like a feather boa draped over a pinstripe suit.

Names have history. Paul Clerkin’s book Dublin Street Names tells us that Leeson Street was called Suesey Street until 1728 when it was named after the Leeson brewing family. Nearby Stephen’s Green also had more names than we care to remember. Stephen’s Green North was Beaux Walk, South was Leeson’s Walk, East was Monk’s Walk and West was French Walk.

So back to the new Suesey Street. In the shift from brasserie to “eatery” there’s been a revamp that involves a glitzy new bar and lots of orange lighting. Think barley sugar dipped in marmalade. And tonight there’s a corporate gang at the bar at the front. We play guess the profession. Too young to be medics, too well-heeled to be journalists, too skinny to be Irish. Tech somethings, we reckon.

This is not a couples restaurant, at least not tonight. There is a two-person booth but it looks like a sort of train carriage on a separate siding from the rest of the passengers. Would we like the terrace? “It’s fully covered and there are heaters.” It’s a crisp Autumn evening and my friend has dressed for glamour over warmth, so no thanks.

In the end we choose a large round table in the longer part of the L-shaped dining room. So what’s happened the food here? In short it’s been nordic-ed. The menu is a list of ingredients. Nouns abound. And there’s chicken in the small pat of butter that comes with the bread. Wait, what? Actual chicken? The waiter is a bit hazy. He comes back to say it’s whipped up with the essence of cooked chicken. It tastes delicious, not particularly chickeny but maybe that’s deliberate.

First up, a starter of goat’s cheese has had almost all trace of goat whipped and lemoned out of it so it’s a delightful, only vaguely dessert-like mousse, surrounded by three tomato wedges, one red, one yellow, one green. There are tangy blobs of green herb vinaigrette to offset the sweetness and crisp cracker shards for crunch. The tomatoes are heirlooms, a description that always has me imagining the reading of the will and some crestfallen beneficiary receiving a prize tomato in a velvet box.

The other starter is a long strip of whiskey-smoked salmon dotted with teeny beets, two scrolls of lightly pickled kohlrabi, sliced so thinly you could read the menu through them, and another roll of pickled cucumber. “God, I love food,” my friend says as she clears the plate. So that’s a dish that nails it.

After the generosity of the starters the mains are a little on the skimpy side. There’s a €33 three-course supper deal here but the extras like a €4 dressed leaves salad make it add up to more quite quickly. There is a crisply butter-fried piece of great hake, speckled with brown shrimp and teeny mussels. Cauliflower has been caramelised to ramp up its sweetness and there’s a lipstick-sized herb gnocchi.

My sirloin comes in two strips, a little more cooked than the rare I requested but plenty flavourful. There’s a meaty reduction, silky brown baby girolles and tiny parsnip and carrot cubes in a smoked cheese custard so fork-lickingly good I hunt down every last cube on the plate. Chips (another €4 extra) are piping hot, crisp and fluffy.

It’s not all perfect. A white chocolate mousse has an excellent espresso ice cream on top but after that it’s a bit flat. My pear cheesecake has a chocolate biscuit base that doesn’t work, not least because breaking it with the spoon involves much muscle and plate clattering.

I like what they’ve done with the place. The food was already good and they’ve freshened up its ideas without compromising the cooking. The Suesey Street of warm wine and reheated chat-up lines is gone. A classier bird has taken her place.

THE VERDICT: Consistently good cooking in a cosy clubby place

Dinner for two with sparkling water, two glasses of wine and teas came to €103.15