Botanic House: A good restaurant disguised as a pub 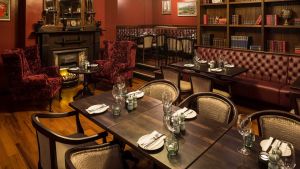 The lights are on again in Botanic House. They’re handsome, glittering ones and the old building looks alive. More importantly, when we arrive in out of a blustery leaf-blown evening, the place smells great – real food wafting from a kitchen where cooking rather than joyless food preparation is being done.

Botanic House went dark more than four years ago. It’s reopened as a restaurant as much as a pub after the people behind Aqua, the Howth seafood restaurant, took over the lease. Bringing fish and seafood to a venerable, old city pub feels like catching the right wave.

The menu in Botanic House is a sensible tweed suit of a list, as familiar and moth-eaten a set of ideas about fish and seafood as you’ll find anywhere in restaurantland. Prawn cocktail? Check. And it’s here without even the tiniest sprinkling of hipster irony. This is all timeless, or dated – depending on how exhausted you are by food trends. And the test will be making the classics sing with better than usual ingredients.

Our table for four is on a plinth overlooking the large bar and dining room. We’re surrounded by wood panelling and Philip Marlowe-style ridged glass. Chairs are comfortable and the young staff are friendly but also good at what they do. My friend, who was trained as a waitress in the States back in the day, spots a silver-service fluidity to their style.

It turns out prawn cocktail is a keeper when it’s made with proper fluffy fresh prawns fried in butter and still warm rather than the recently frozen jelly bean-sized shrimps of old. Here, the prawns have been drizzled with a house-made Marie Rose sauce and instead of being layered into a wine glass (hello happy 1970s’ memories) it’s on a flat plate. There’s crisp iceberg and rectangles of tasty cucumber here too. But it’s the prawns that shine.

Crab claws are soft and thready in a way that hints at zero time spent frozen and plenty of time being attached to a crab living not far from here until very recently. They’re some of the best I’ve eaten and come with a well-judged soupy garlic butter. A third starter of crab meat on toast takes sweet thready white meat and tops it with a slippery sliver of ruby grapefruit and ribbons of delicately smoked salmon.

I have been pilfering tasters of all these starters because I’m saving myself for the main platter of hot native shellfish. It sounds like a charity calendar but it is a large plate of what looks like mainly mussels. Under all those shells is a quarter lobster which turns out to be two claws. They deliver my winkler and claw cracker folded in a napkin like a surgeon’s tools. A set of scrubs for the splattering would probably be useful too, but that’s my challenge.

The mussels are fine but the lobster meat is divine, warm and wobbly and all the tastier for having to winkle it out one juicy morsel at a time. There are more of those wonderful crab claws in the murky of the sauce which is my only quibble with the dish. It’s a light black bean, vaguely chilli-laced, broth that feels a little out of place on a platter this brilliant, and also too messy when you’re eating much of this dish with your bare hands. Seafood like this needs little more than an anointing with melted butter. The black bean sauce just comes across as odd. If you’re going to do the classics, confine the fusion notions to the desserts, or better still the music.

There’s a plate of hake which comes with giant cous cous. The fish is good enough to hold its own with some buttery salty spuds but again they’re reaching for gastropub ideas rather than home-cooking here. A steak is good with good chips and the burger is excellent – juicy, well-cooked meat in a soft bun with a juicy fruit chutney that’s obviously house made, and similarly the garlic mayonnaise for the chips.

There’s no black forest gateaux (surely due a comeback by now?) but its close second on the dessert tropes top 10 is the vanilla crème brûlée. Again, it’s executed perfectly. There’s a tiny sweet-sized meringue on top, and more of them in an Eton mess, which are divine thanks to their powdery home-cooked texture and flavour. A gorgeous meringue is the starting point for Eton mess. Everything else is just window dressing. The cinnamon and apple crumble is the only disappointment. Good tangy stewed apple is topped with a loose mound of what looks like pale breadcrumbs. This is pre-crumble because the step of baking the whole lot together so the pink juices bubble up through the crumb and turn the edges crisp and chewy is where the magic happens.

Embracing the classics can feel fresh when we face the fact that many of those dishes were woefully executed back in their day. Putting them into a lovely pub with just-caught local fish and seafood this good makes us very happy, especially the two of us for whom Botanic House is their local pub and impressive restaurant in one.

Dinner for four with a bottle of Picpoul, sparkling water and three shared desserts came to €196.05

Verdict: A good restaurant disguised as a handsome pub

Who’d spend €67 on Gwyneth Paltrow’s This Smells Like My Vagina candle?
10