A top-notch two-course meal for €17

Restaurant review: Farmhill proves that suburbia is where it’s at 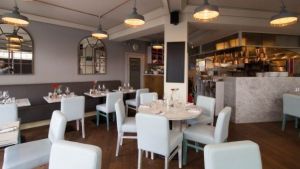 Could you find Butter Bay on a map of Ireland? You’d need to know your Norse. Smerwick Harbour in Kerry comes from the Norse words for butter and harbour. We think of foodie obsessions as a modern phenomenon but thoughts of our stomachs run deep through Irish placenames, like words through a stick of rock. Dr Mairtin Mac an Iomaire head of the DIT’s Culinary Arts degree told us about Butter Bay when he mapped dairy-inspired placenames at the Appetite Talks a couple of years ago.

We lost the single degree of separation when farm animals moved out of cities. But an urban life sealed off from their sight, sound and smells is a relatively new thing. In the 1990s there was a working tannery in my inner city neighbourhood. It’s not that long ago that meathooks were used to hang carcasses, rather than filament bulbs in hipster cocktail bars. And the ghosts of slaughterhouses, markets and backyard animals live on in names of suburbs and streets.

And so to Goatstown, where the goat to person ratio is so low it could be more accurately called Humanstown. I’m heading for Farmhill. It’s a restaurant that couldn’t get more suburban in its location, set in the typical strip of shops to which suburban children are sent for messages off Farmhill Road. From the outside it looks like a coffee shop. But inside something a lot more interesting is going on.

The head chef is the talented Anita Thoma, late of the city centre Il Primo. She’s not here today. Later I see from her Twitter feed she’s been celebrating a “big birthday” with a cook’s tour of Italy and Spain, before returning to home turf again.

Her influence is all over the simple appetising menu. It’s cheffy in the best possible sense, rigorous about ingredients and flavour. We are a party of three including a 10 year-old who says she always orders “anything with Parmesan” on the menu. It’s a pretty good rule of thumb to bring to any restaurant.

In Farmhill it gets her a plate of slippery rigatoni pasta tubes with generous chunks of free-range chicken and ribbons of leeks, with that Italian king of cheeses stirred into a creamy sauce. There’s a juicy Irish scarlet heifer beef burger on a brioche bun. It’s a dish that comes together with the sweet tang of caramelised onions, good cheese and excellent chips. I get the special, a pork belly salad that sounds modest but is several great things on a plate. First those slices of belly, cut slightly thicker than rashers and cooked slowly in their own fat until they’re fudgy inside, crisp outside. To cut through all that luscious pig there’s a spanking fresh scatter of mustardy mizuna leaves, a lip-tingling horseradish mayonnaise, blobs of excellent fennel and tomato chutney and some orange segments with the pith cut off. This truly lovely salad is finished off with pomegranate seeds that taste like they were just freed from the white flesh of a fresh fruit.

Desserts are equally simple and accomplished and show how much further your euro goes when you escape from between the canals. Mediocre desserts for €8 are now the norm so hats off to Farmhill’s €3 chocolate pot, an espresso cup filled with just the right amount of spoon-sticking chocolate mousse. The red and black currants on the frozen yoghurt manage to be sweet but still tangy and a warm chocolate fudge cake does precisely what it needs to do.

Suburban restaurants are beginning to be where it’s at. The almost audible clank and hiss as another wonky old Irish property boom gears up does not auger well for our food scene. Rising rents push us back into the arms of the chains and cocktail bars with menus designed by accountants. Thoma has a two course evening menu for €17, for which I will definitely be returning. Given the quality of ingredients and brilliant cooking this is a properly indictable steal. City dwellers don’t live cheek by jowl with farms anymore. But if we’re lucky a chef will bring the best of those farms to the table and that’s what we have in Farmhill.

Lunch for three with desserts and a good coffee came to €65.80

We timed our annual treat of lunch in Dervla James’ Pudding Row in the Sligo village of Easkey to perfection last month. Not only were the soft warm bagels fresh out of the oven but six-month-old Matilda, her youngest daughter, was brought around the tables to say hello. James is one of Ireland’s best bakers. Those bagels?  The best I’ve eaten. And then there was the biscuity buttery pastry in my beetroot tart. It was baked blind then slathered with rocket pesto, topped with wedges of beet flecked with thyme and the spaces filled with goats cheese before the whole lot was warmed up and served with a beautiful salad, threaded through with red onion and cucumber slices pickled with star anise.  Beautiful food in a beautiful place. Lunch for four with soft drinks and a great takeaway coffee (in a fully compostable cup) came to €45.40.