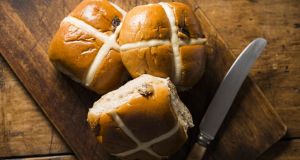 On Good Friday, April 11th, 1884, a bakery in Hawaii advertised the sale of their “Hot Cross Buns”. The buns would be on sale from 5am to 5pm. While time may seem an irrelevant detail of food history, the advertisement points to the origins of this very famous bun and its connection with Irish food history.

The origin of the hot cross bun goes back to medieval times, at least as far back as the 14th century. Seemingly, in 1361, a monk in St Albans developed a recipe called an “Alban Bun” and distributed the bun to the local poor on Good Friday. The cross on the bun signifed the Crucifixion while the spices in the bun pointed to the embalming of Christ. Whether or not this is true, the buns have been associated with Easter and with an end to fasting after Lent.

The first definite record of hot cross buns in food history comes from a London street cry: “Good Friday comes this month, the old woman runs. With one or two a penny hot cross buns”. This appeared in print in Poor Robin’s Almanack for 1733.

In Ireland, hot cross buns are always available around Easter time, even though we may have forgotten most of the complex symbolism that comes with them. But traditions are hard things to break and for me I often wonder how they began and morph into different ones.

Hot cross buns contain spices and dried fruit that do not originate in Ireland, so I wonder (these are the questions that keep me up at night) if we ever made these buns without these ingredients? What would an Irish hot cross bun look like? Would it be flavoured with woodruff or meadowsweet, two herbs which are indigenous to Ireland.

We forget how much the spice trade has impacted are food history. So many of our recipes contain these aromats that continue to be used daily.

So while I would encourage you to make your own hot cross buns over the coming weeks (The Ballymaloe cookbook has a wonderful recipe), never accept a recipe as it is. Always probe your food history.

Celebrating that special relationship between grandparents and grandchildren