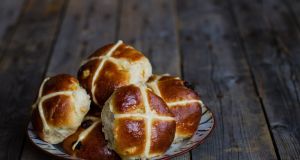 As long as you stick to the same proportions, you can put just about anything in a hot cross bun

These may have been available in shops since February (and it seems to get earlier every year), but it does spoil the fun of making your own. They may take some time to prep but are all part of the pre-Easter ritual.

200ml milk, plus a little extra for glazing

50g golden caster sugar, plus 1 tbsp extra for the syrup

Pour the milk into a small pan. Squash the cardamom pods with the back of a knife, then add to the milk with the cinnamon, cloves, nutmeg and saffron. Heat gently to a simmer, then take the pan off the heat and leave the milk to infuse for an hour.

Strain out the whole spices, then gently reheat the milk until it’s warm, not hot. Put the strong white flour and yeast in a large bowl, then grate in the butter and rub into the flour with your fingertips (or pulse in a food processor) until well combined. Stir in the sugar, salt and ginger, then make a well in the middle of the flour.

Lightly beat two of the eggs, then pour these into the well with the milk. Stir together to make a soft, sticky dough, then tip out on to a very lightly floured surface and knead for about 10 minutes, until smooth and springy to the touch (if you have a food mixer, feel free to use that to make life easier).

Grease a large bowl and put the dough in it. Cover loosely and leave somewhere draught-free, and preferably fairly warm if you’re in a hurry, until it has roughly doubled in size: this should take about two hours in your average kitchen. Meanwhile, line two baking sheets with greaseproof paper.

Tip the risen dough on to a lightly greased work surface and knead again for a minute or so, just to knock out the air. Roughly flatten it out, then scatter over the currants and peel (for classic buns), or whatever mix of dried fruit, nuts or sweets you fancy (see step 9 for ideas). Knead the dough again, to distribute the fruit evenly.

Divide the dough into 16 equal pieces (a decent pair of scales will make this much easier), form into balls and arrange on the lined baking sheets. Score a cross in the top of each one, then cover loosely and put in a warm place to prove for about an hour. Towards the end of this time, heat the oven to 200C/390F/gas 6.

Mix the plain flour with a pinch of salt and just enough water to make a stiff paste. Beat the remaining egg with a dash of milk. Brush the top of each bun with the egg-and-milk mixture, then pipe (or use a teaspoon to drop) lines of the paste over the cross scored on to each bun.

Bake the buns for about 25 minutes, until golden. Meanwhile, mix a tablespoon of caster sugar with a tablespoon of boiling water, to make a syrup. When the buns come out of the oven, paint the tops with the glaze, then transfer to a rack to cool to room temperature before eating.

As long as you stick to the same proportions, you can put just about anything in a hot cross bun. Chocolate chips or toffee pieces tend to be especially popular with children (well, obvs), but dried apricots, cherries, cranberries, figs, crystallised ginger and chopped nuts also work well in place of the traditional vine fruit and peel combination.