Plastic packaging on bananas? Time to wrap it up 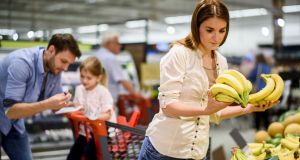 A lot can be done for farmers in developing countries by choosing the top banana. Photograph: iStock

With its thick skin, there really is no need to put packaging on bananas. Yet many of those on sale come covered in their own plastic bags inside cardboard boxes lined with plastic even as the tide is turning against this practice. The information on the labels gives a clue as to why this is.

Take Lidl. Some of its Oakland bananas come in clear plastic bags. Others come with a brown band holding them together, a change it says is expected to remove 10,000kg of plastic each year.

The label on the bagged fruit shows us it comes from Belize, the Central American country formerly known as British Honduras. There is also a triangular symbol with a 4 inside and the letters “LDPE plastic recyclable”. This means the plastic is low-density polyethylene and can be recycled, depending on where you live and who takes your recycling. Hence the note to “check with your local council”.

In Ireland, soft plastic is generally not welcome by rubbish companies. Greyhound, for example, says it does not have the technology to recycle soft plastics such as these wrappers. Citybin says soft plastic is not recyclable, though it is in some jurisdictions. So don’t give it to them. There’s not a lot else on those labels except to say that bananas can be one of your five a day, and that they are Rainforest Alliance Certified, as identified by the familiar green frog.

Keen-eyed readers will notice that some products show the Rainforest Alliance symbol, some have the Fairtrade mark and some have both. That’s because although they are similar, they don’t have exactly the same focus.

Fairtrade standards were drawn up to tackle poverty and to help producers in some of the poorest countries in the world by giving them a guaranteed price for their products.

The Rainforest Alliance says its certification focuses on how farms are managed. Farms must meet the standards set by the Sustainable Agriculture Network, a network of non-governmental organisations. These look at social, economic, and environmental concerns. It aims to train up farmers to negotiate for themselves in the global marketplace. Much of its work is about teaching them to operate efficiently and responsibly, to make more money and to conserve the natural resources on which they and their families will depend in the future, it says.

The bananas held together with a brown band have the Fairtrade mark and come from the Dominican Republic. There’s little room for explanations on the few centimetres of space there, but Lidl says it worked with its Irish supplier Global Fruit and growers in the Dominican Republic to remove the plastic packaging. That brown band is biodegradeable, which is not written on the label even though it would seem to be a good selling point.

The Dominican Republic is the largest producer of organic bananas in the world, according to the Food and Agriculture Organisation of the United Nations, with more than half of all organic bananas being grown there. Nearly all of its organic bananas are sent to the EU.

What’s surprising is that the banded Fairtrade organic bananas seem to cost €1.59 in most supermarkets, not just the discounters. They are more expensive than the others at 27c each, though often by just 7 cents. That highlights how little the workers are paid and how little it can cost us to pay a fairer price.

Under-priced bananas are harvested by workers engaged in back-breaking labour and exposed to pesticides for just cents a day. The drive by European supermarkets to keep a lid on banana prices has not helped conditions on plantations, some of which use child labour. A 2016 report from Oxfam highlighted “inhumane conditions”.

Most of the packaging or boxes holding the loose bananas also has the word Cavendish. This is the sweet variety that accounts for 95 per cent of all bananas sold in the $36 billion industry, according to the Financial Times. Previously. the favoured variety was the Gros Michel, but that was wiped out in the 1950s by a strain of disease now affecting the Cavendish. Scientists are searching for a treatment because the Cavendish has a high yield and travels well, which is important for exporters. It is one of just 1,000 varieties, however.

So a lot of good can be done by choosing the top banana.

Good news: Seven things that made us happy today
6

Róisín Ingle: How I met Matt Damon. And it wasn’t in Dalkey
8