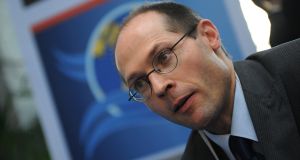 Former UN special rapporteur on the right to food, Olivier De Schutter: people are being “encouraged to eat too much of the bad things”. Photograph: Alberto Pizzoli/AFP/Getty Images

The former UN special rapporteur on the right to food Olivier de Schutter launched a major report on Thursday calling for a “common food policy” to achieve what the EU Common Agricultural Policy (CAP) has failed to do.

The report spells out the stark figures about Europe’s food system and its effects. Up to 80 per cent of healthcare costs are caused by chronic diseases, many of which are down to poor diets.

Europe faces annual food waste costs of €143 billion. The model of industrialised export-oriented agriculture generates hidden costs “which are not included in retail prices but are incurred by people around the world and passed on to future generations”, the report Towards a Common Food Policy for the European Union states.

In an interview with The Irish Times Mr de Schutter said the three years of research behind the report found large areas of common ground between groups that were often pitted against each other in the food fight.

“When the anti-poverty groups met farm organisations, one would have thought that these two separate set of actors had very different interests. Because for some low-cost food is the solution and for others decent remuneration is the objective. In fact, they discovered they were all victims of the same junk food being presented as a viable alternative to strong social policies and to food chains that were more equitable.”

European food policy is “basically the result of the lobbying that the big players can exercise”, Mr de Schutter said. “They have a huge weight in political decision making, particularly at EU level within the parliament and the commission.”

One way to ensure that they did not have the power to veto positive environmental and human health measures was to “democratise how the food policies are developed”, Mr de Schutter said.

“This is why we believe the establishment of a food policy council is a major ingredient, an essential ingredient for the change that we’re proposing.

“Food is something that is very intimate to peoples’ lives on a daily basis, and influenced by the food environment which they inhabit. And, let’s be blunt about this, for the most part, the food environment is not promoting healthy diets or wellbeing; it’s basically encouraging people to eat too much of the bad things,” he said.

EU reform of public procurement and VAT could “shift the incentives in favour of healthy and sustainable diets”, the report says. Member states would be required to develop “health diet plans”, which would cover public procurement, urban planning, fiscal and social policies, restrict junk food marketing and encourage nutrition education “as a condition for unlocking CAP payments” .

De Schutter said Ireland’s high dependence on livestock agriculture was far from unique. Dairy farming was a large part of Belgium’s farming scene. “Farmers are stuck in the system as it is and they don’t see how they could build an alternative to reduce their emissions or to have less polluting farming methods. So, what we certainly need is a financial support given to these farmers for the three or four years during which they shall have to make a transition.”

The report also recommends the setting up of an EU land observatory to “monitor land markets” and “promote rights of first refusal for young agroecological farmers”. Currently, 80 per cent of payments under the CAP go to just 20 per cent of farms,.

“Farmers in particular are paying a high price: the share of EU food chain value going to agriculture dropped from 31 per cent in 1995 to 21 per cent in 2018, while farmers faced a 40 per cent increase in input costs between 2000 and 2010.”

Mr De Schutter believes a common food policy could help fix more than just the food system. “The new institutions have a huge opportunity to reconcile European citizens with the European project by saying we shall now work for your health and wellbeing to reform food systems rather than having these food systems simply developing based on policies that perpetuate past choices because no one dares to take a bold move towards reform.”

How will the Covid-19 era affect our youngest citizens?
3

School closure might be a dream for some children, but it is a nightmare for others
Real news has value SUBSCRIBE