‘Like a Big Mac, But Juicier’: Burger King trolls McDonald’s

After Supermac’s victory, Burger King pokes fun at its giant rival by renaming the Whopper burger 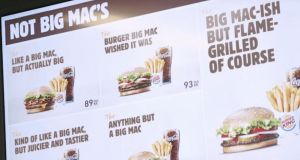 When Pat McDonagh won his battle to force McDonald’s to give up its Big Mac trademark, he called it a victory for small businesses, a case of David versus Goliath that would at last allow Supermac’s, his Irish fast-food company, to expand into Europe. What he might not have envisaged was that, barely a fortnight later, another industry giant would use his legal victory to take a big, juicy bite out of the world’s biggest burger chain.

Burger King’s Swedish operation quickly revamped its menus to poke fun at McDonald’s loss, which followed its claim that customers in EU countries would confuse its Big Mac with Supermac’s. In a video Burger King has released, its menu board lists meal options such as “Like a Big Mac, But Actually Big”, “Kind of Like a Big Mac, But Juicier and Tastier”, and “Big Mac-ish But Flame-Grilled of Course”.

“McDonald’s just lost its trademark for the Big Mac for suing a much smaller player,” Iwo Zakowski, the head of Burger King’s Swedish operation, says. “It’s too much fun for us to stay away.”

Burger King has a history of trolling McDonald’s. In December, in a complex piece of digital manoeuvring, its American stores offered 1c Whoppers to people in the vicinity of a McDonald’s, CNN reported. To promote its app, it allowed users to unlock the deal if they were near a McDonald’s location. They were then directed to the nearest Burger King, where they could obtain something Big Mac-ish, but flame grilled, of course. – Guardian