Carmel Somers: The trick with pears is to buy them firm to ripen over a week at home 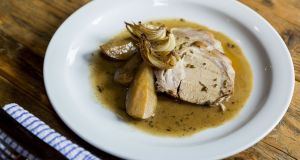 “Grow pears for your heirs,” the saying goes. We wait years for pear trees to bear fruit and then must be patient and give them attention while they ripen. But the effort is completely worth the wait and what a great legacy to pass on to our young.

I have no recollection of ever eating a fresh pear when I was young, or of them being sold in our grocery shop. I suppose it was due to the fact that they were difficult to deal with and not ready to eat like the old reliable apple, orange or grapes.

The pears I remember came in a tin and I thought they were perfect. I was prone to secretly eating a whole tin with a large splash of cream, which no doubt contributed to my pear shape.

Pears originated in Asia but were made popular in Europe by Louis XIV during the 17th century. He reportedly fell in love with them, as well as developing a fondness for peeling fruit in such a way that the skin could be put back into place.

It was during my time in France that I discovered the true joy of the pear and how to care for them. I was overwhelmed by the many varieties, their colours, shapes and flavours and their delightful diversity. I discovered the marriage of pear and cheese, in particular blue cheese. The sweetness of the ripe pear with the sharpness of the mature cheese never fails to disappoint. I was introduced to combining pears, nuts and bitter leaves as a starter as well as poached or pickled to accompany game or fowl.

Pears make a great last-minute dessert. Simply poach in a sugar syrup with vanilla and serve with cream, or poach or bake in spiced red wine or just cook into a puree with a squeeze of lemon.

When choosing pears in this country a bit of forward planning is needed. We buy them firm and ripen them at home, allowing a least a week and sometimes longer for the process to happen. Ripening pears takes time and attention. They need to be checked daily and you’ll notice that they soften around the stem as they ripen. I feel the reason most people don’t appreciate pears is down to a lack of patience during the ripening process.

The whole of the pear has great health benefits to us. The skin holds more nourishment than the pulp, making them ideal for juicing. We’re in the middle of the pear season so take this opportunity to enjoy them while they’re at their best and to seek out some different varieties.

This is ideal for a quick lunch and also works as a starter. The original recipe is with Stilton, but I find it’s a great way to use whatever cheese you have in the fridge. You could also try this on pizza dough served with an endive and walnut salad on the side.

Start by heating the grill and toasting the bread until golden. Butter each of the slices and place on an oven tray and top with the leaves followed by the sliced pears along with a sprinkle of salt and finally the cheese.

Place the tray under a very hot grill until the cheese starts to bubble. Allow to sit for a couple of minutes before serving with black pepper.

Oil and season the meat. Put a large deep casserole pot on a high heat, and when smoking, add the pork and brown all over until golden. Add the onion and pears along with the herbs, cider and honey. Cover with a lid , bring to a simmer and then bake for an hour or until nice and tender.

Serve with mashed potatoes or polenta and some boiled cabbage.

This would be the perfect end to any meal served with a glass of port or a red dessert wine.

Start by making the pastry. Preheat the oven to 180 degrees. Put the flour into a bowl and rub in the butter until it resembles fine breadcrumbs. Add in the salt and sugar and mix well. Finally add the water to the egg yolk to loosen it and add the mixture and bring it together. Allow to rest for 30 minutes. Bake blind by covering with baking parchment weighted by uncooked rice or beans for about 15 minutes, then remove the parchment and cook for another five minutes. Remove and allow to cool.

While the base is baking, place the butter, cheese and sugar in a food processor and pulse for 30 seconds, scraping down the sides as you go. Add the almonds and eggs and pulse again until well mixed.

3. Scatter the pears over the cooked pastry without them overlapping and spoon the mixture on top and around them. Don’t worry about how it looks – it will all even out in the oven. Bake for 20-30 minutes or until nicely golden on top. Allow to cool before serving.

Clafoutis is quick, simple, versatile and heart-warming. This works well on its own but feel free to add a spoon of cream. Ideal as an afternoon treat with a pot of tea.

2. Melt a little butter in a pan and add the pears and the lemon juice.

3. Sprinkle with a tablespoon of the sugar and gently stew the pears for a few minutes until sticky.

4. Butter the base and sides of a deep dish that will take the pears without overlapping.

5. Beat together the yolk from the separated egg and the other two egg yolks, 50g of the sugar, salt and potato flour. Stir in the cream and mix well. Briefly whisk the egg white with the remaining sugar until glossy and fold in to the custard mixture.

6. Pour over the pears and place the dish into a roasting tin filled halfway with water and bake for 20-25 minutes.

7. Turn off oven and open the door for 10 minutes to cool.