Now We Know... the difference between braising and stewing

It’s all about the cut of the meat, but either method guarantees one-pot wonders 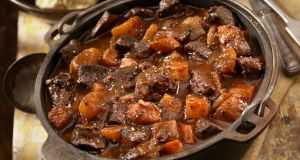 “Braising is for cheaper, larger cuts of meat, such as beef cheeks. Stewing would use smaller cuts of meat that are uniform in size,” says chef Brian McDermott. Photograph: iStock

As the seasons change, so does our appetite. We crave comfort food that is slow-cooked and full of flavour. ’Tis the season for one-pot wonders, and I say bring it on. There is a variety of methods one can draw on when it comes to slow cooking and, as a wise cook might soliloquise – to braise or to stew, that is the question. But what exactly is the difference between braising and stewing?

Chef Brian McDermott (chefbrianmcdermott.com) is an award-winning chef from Co Donegal. He was named Ulster’s Local Food Hero at this year’s Irish Restaurant Awards and he is also the chef-proprietor at the newly-restored Foyle Hotel (foylehotel.ie) in Moville – which Georgina Campbell named Newcomer of the Year for 2019 – on the beautiful Inishowen peninsula. Apart from collecting accolades, McDermott is a sincere and passionate advocate for good, local food and his approach to cooking is inspired by his Donegal mammy.

“The key difference between braising and stewing,” he explains, “is the cut of meat. Braising is for cheaper, larger cuts of meat, such as beef cheeks. Stewing would use smaller cuts of meat that are uniform in size and it’s key to stewing that the meat is totally immersed in liquid. Both processes involve the lid being on the pot, which is also very important. Stewing would normally take place on the stove top and and braising would be typically transferred to the oven.” In case you were wondering, pot-roasting is another name for braising, he explains.

McDermott grew up in a family of 12 children in Burt, Co Donegal, and, to this day, stewing and braising brings him back to his mother’s table. “This is the type of cooking I love,” he says. “It’s slow and low. It’s foolproof cooking but it does take patience. I love the warm, homely smell that it brings to your kitchen. It transfers me back to my mother cooking for 14 of us. We grew up on braising and stews.”

McDermott thinks his mother relied on stews and braising because, for one thing, she only had a four-hob stove and had to feed a large family from it. Stewing and braising was efficient for her, and the cuts of meat were often cheap. All of McDermott’s 11 siblings are now over 6ft-tall, he says, so the stews certainly didn’t do any harm.

McDermott’s top tip for braising and stewing is to always brown the meat sufficiently as a first step. “If you can develop the caramelised, brown and slightly burnt appearance to your meat at the beginning, it will add a deeper flavour through the long, slow process of cooking,” he explains. “It also seals the meat, which prevents juices from escaping.”

Dating in the age of Covid: ‘The minute we saw each other, we kissed’
Real news has value SUBSCRIBE