A whole new world of worry has opened up: What if I never have babies?

Catherine Conroy: We lost a pregnancy this summer. I know people who have had it a lot worse 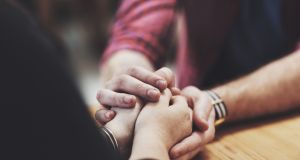 Last week, I saw a therapist on Monday and an acupuncturist on Saturday. It wouldn’t be very often that I’d bookend my week with this sort of radical self-care, but a whole new world of worry has opened up to me: the babies are not forthcoming.

I hadn’t seen my therapist in years.

So how are you? she says.

Well I’m married now, I say. So we don’t have to talk about men anymore.

This is a shocking thing: that all the years of agonising over love and its absence might be so easily dispensed with. Now we need to talk about babies, bargaining and the feeling of moving backwards.

I say to her, what if we don’t get to have babies? We’ll have to do something else really wonderful instead. We’ll have to be that fabulous couple who went to live on a vineyard in Italy or something.

She shakes her head. She doesn’t think that is necessary.

But I am no stranger to this idea of bargaining; if I don’t get this, I’ll do that. I spent my early 30s with other people’s confetti in my hair so I came at loneliness with a shield and a sword. I moved to London. I spent Saturdays in galleries. I travelled alone to beautiful places.

Then I came home and met Paul at Electric Picnic, tall and bearded beside me, and that was that. We were married within two years.

(Where did I find you at all, I say to him sometimes. In a field in Laois, he replies.)

We lost a pregnancy this summer. It was very early on. I know people who have had it a lot worse. That is something you can always say.

It started to go wrong on a very warm Sunday in July. I was sitting in the garden at an old kitchen table and chairs we’d bought on DoneDeal and painted bright blue. I’d gotten quite green-fingered, so all around me were carrots and onions and mint that had grown like mad in the heat. Paul was at work and Dad was visiting. When I realised what was happening, I asked Dad to leave because he cries if his daughters cry. So he tried to leave, but his car wouldn’t start. I don’t know how much time passed before I realised he was still sitting in the driveway.

Nothing about the short-lived pregnancy was textbook, and it required a day in the Rotunda to end it. There were three empty beds in our ward. It was an early start so, only sort of joking, I said to Paul, “Sure throw yourself into one and have a snooze.” The nurse said, “We wouldn’t know what to do with a man in a bed around here.”

When I go into theatre, he goes for some tea. I come around in a recovery room with women who’ve had emergency caesareans. The nurse warned me I might wake up to babies in the room. When I was offered more morphine, I said yes. When I came back to the ward, Paul was waiting, and to see his face was the loveliest thing in the world.

I told some people what happened. For me, it was not something I needed to be silent about. But there is something about this particular conversation: there is no good place for it.

My WhatsApp is filled with pictures of babies; gorgeous crumpled creatures with shocks of hair, or huge searching eyes.

I find myself standing here, wanting to be over there.

Even though here is a good place too, with a man who plays guitar on the sofa, and a dog who sleeps on your lap.

I bought this house 10 years ago and moved out thinking it was a huge mistake, but when the rent on a one-bed became more than a mortgage, we were thankful for it and moved back in.

I told the therapist I was worried about moving backwards.

But the truth is, this summer the hanging baskets in the back garden were heavy with flowers, before the greenfly came. The Luas went in nearby, they’ve resurfaced the potholed road, and everyone is a bit nicer to each other now. We are people who care too much about their dog, and when we walk her in the evenings we meet others like us and have hairdresser conversations about holidays and renovations.

It’s now the house that I left to get married on a Friday morning, and it’s the house where I’ve danced in the kitchen with my husband because he is a sap like me, thank God. When we lit the first fire last winter, the room filled with smoke. Paul found an old skeleton of a crow in the chimney, shiny and silvered by heat and it looked oddly like treasure.

We prided ourselves all summer on never being without mirth; I joked about losing the baby weight, we wondered about the whereabouts of the phantom baby. We became whispery comedians in waiting rooms. But it still feels like my body is in a faraway place and I want it to come home.

So it was because the therapist said that relaxing is so important that I found myself in the acupuncturist’s, looking down at the dome of my needle-covered Hellraiser belly. She says I am full of damp, a weakness in my system I was born with. It feels nice to be absolved of responsibility. She puts a little heat lamp over my feet, “Cold feet, cold womb!” She puts another needle in the centre of my forehead, “Amputate the mind!”

Mostly, she is very kind.

Paul is in another room, getting his bad back cracked into shape. An hour later, we both stagger out into reception, unravelled and laughing at each other’s glazed eyes and crumpled faces.